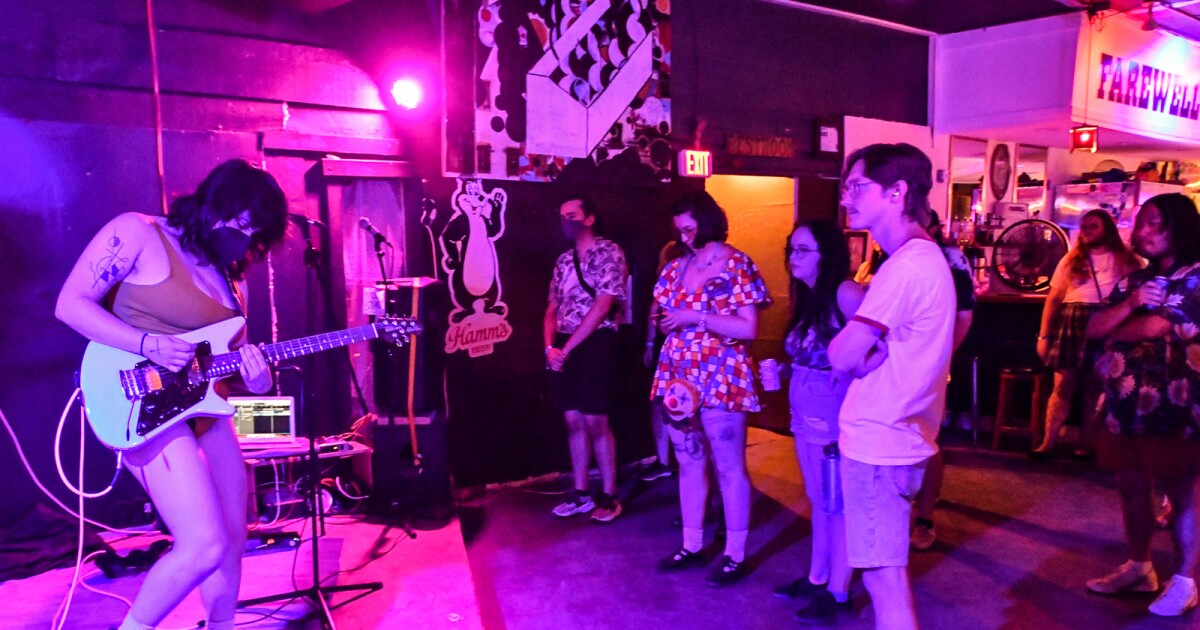 Randomly embedded in miles of partially abandoned warehouses, Farewell is a music venue, bar and cafe on Stadium Drive, just east of Blue River. Every evening, cars line the adjacent street and deafening music blares at the door.

Travel inside, past the main event, and down the hallway (bathrooms to the right) to discover a large gravel courtyard, complete with a fire pit, broken chairs, casual (but sturdy) garden beds springing from troughs and groups of people smoking cigarettes as if they were old fashioned.

“It’s like trying to find some legitimacy while maintaining who we all are and have been for a decade,” says Max Popoff, “that is, a bunch of kids drinking beers in the yard and booking bands from far away places and hanging out with these people and trying to get them some money so they can keep touring and keep playing music.

Popoff runs the newly licensed venue, cafe and bar with Shayne Carpathia and Deano Erickson. Everyone does a bit of everything, but Popoff discovered the building and has been here the longest.

His experience as a private contractor has allowed him to lead a number of needed repairs over the years, from rebuilding the collapsed roof to bringing the bathrooms up to standard.

Popoff can often be found towering behind a bar on the left, offsetting his formidable 6’4” stature with an enthusiastic smile beaming between red-rimmed glasses and a ginger beard.

Her giant all-black mastiff dog named Mouse sleepily stares around, sniffing the air as the door closes before resuming her napping position lying on the floor.

Bands that play at Farewell span a spectrum of genres from punk and electronic to hip hop and indie rock. There are shows every weekend (and many weekdays) and the venue has featured local bands like Vice Grip and Silicone Valley, as well as national tours like Show Me the Body and Sweeping Promises.

Tickets are available at the door, usually on a sliding scale of $5-10, but Popoff says no one is ever turned away for lack of funds.

Farewell gives nearly all gate proceeds to even the smallest bands – a break from the normal industry practice of not paying local ushers and giving the headliner just a fraction of the chopped off.

The idea to open a bar was born out of necessity, Popoff explains, in order to maintain that vision while earning enough money to run the space.

“I think sometimes there’s backlash, and people are like, ‘Why is this a bar now? ‘” Popoff said. “And we’re like, we can’t pay if we don’t sell a few beers.”

A front corner of the room houses the stage, immediately to the left of the entrance and comfortably visible from any part of the rectangular interior. Blue and pink lighting softens the raw brick walls and concrete floor, where listeners reflect in the standing room between the performance area and the bar.

Most of the crowd spends the time between sets socializing in the backyard, maintaining a constant buzz of chatter.

Originally known as Farewell Transmission (after Jason Molina’s song), the dark, cavernous interior during the day is reminiscent of an elongated garage where one could sit around drinking beers on sofas of 10 year. A flurry of furious comments from Google lamenting the lack of a car transmission shop prompted the name adjustment.

After moving to Kansas City seven years ago from his hometown of Denver, Popoff ran a DIY music venue called Roller Dog on Troost Avenue with the intention of establishing a space that could nurture a city’s art scene. accessible and low-budget way.

However, he couldn’t help feeling that his presence there was an intrusion.

“It could have been and now is a black business again, and I felt like it was imposing,” he says. “I didn’t want to take away from somebody else who had a business there, so that a bunch of young punks could get drunk and then, like, tag a building.”

The building that now houses Farewell was discovered by Popoff in 2018 while on his way to the landfill one day, charming it despite its general dilapidation.

A few years and many licensing hurdles later, Popoff, Carpathia, Erickson, and Bohlender are still striving to create a safe, accessible, and authentic space for current and future weirdos.

“I think it’s like our mission statement,” Popoff says. “If there was one thing to be had through all of this and all of the iterations of Farewell: it’s that it’s just supposed to be a cozy place where you can go see your friends and you can soak in or not, and supporting other people around us who are trying to create things.”

Farewell is open from noon to 1 a.m., Tuesday through Saturday, at 6515 Stadium Drive, Kansas City, Missouri.

We don’t talk about trash enough