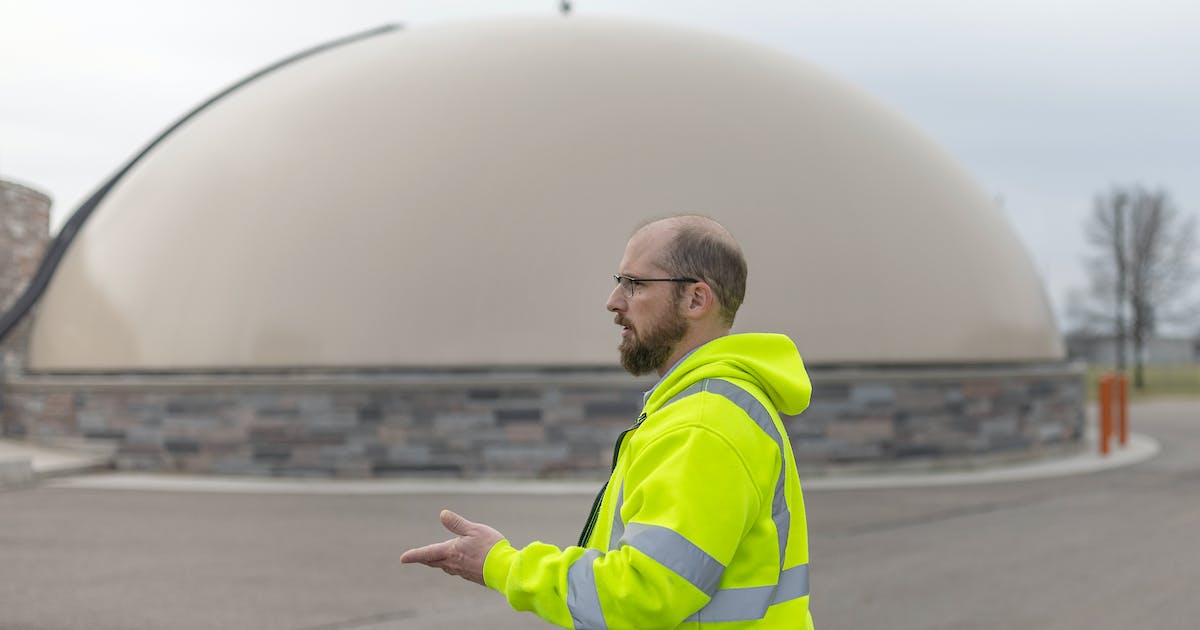 ST. CLOUD — Most of the time, it smells like rotten eggs at the St. Cloud sewage plant. This is a good sign, it means that the organisms that decompose the waste are busy at work. But some days puffs reminiscent of strawberry daquiris or barbecue sauce sting employees’ noses.

The experience is unique to St. Cloud, the only municipal facility in the state to collect from local food and beer makers their high-strength waste – often a sugar-laden liquid left over from rinsing production lines.

And the facility not only accepts high-strength waste, but is able to turn it into fuel and fertilizer. It’s just one of the many reasons the city has become a leader in renewable energy efforts over the past decade.

“St. Cloud is clearly one of the cities that defines what a clean energy future can look like,” said Frank Kohlasch, director of climate for the Minnesota Pollution Control Agency. “[The] The facility is unique for Minnesota and for the country – where they integrate the treatment of their wastewater, the use of solar energy to power their services, and the recovery of biogas and fertilizers.

The treatment center is also set to be the first wastewater treatment facility in the world to produce green hydrogen and pure oxygen onsite, as well as running the country’s first program to capture the carbon from the exhaust and be able to sell the end product. for building materials.

Kohlasch described the efforts as a “circular economy,” where a waste stream becomes an input for another industry, while also recapturing the carbon so it isn’t released into the atmosphere. This could potentially allow the city to become carbon negative – where it stores more carbon than it generates.

“It’s really exciting that the City of St. Cloud is embarking on this bold work,” he said. “This is critically important both to protecting Minnesota’s climate, but also to protecting our water quality and growing our clean economy.”

St. Cloud has operated a hydroelectric dam on the Mississippi River for nearly 35 years. Each year, the facility generates more than 50 million kilowatt hours of electrical energy, which is equivalent to powering nearly 5,000 homes for a year.

But the city’s recent push for renewable energy stems from the Great Recession, which has forced officials to look for ways to cut spending. This has spurred plans to update streetlights to LED lighting, convert the city’s sports complex into a geothermal facility to save natural gas, purchase power from solar gardens, and install solar panels on a dozen of city buildings.

Eight years ago, Mayor Dave Kleis set a goal for the city to be carbon neutral by 2030, not counting the power generated by the hydroelectric dam. The city achieved this goal in 2020. Taking into account the hydroelectric installation, the city now produces three times more energy than it uses as a municipality, saving approximately 1.5 million dollars and counts on the annual budget.

“We set ourselves some pretty high goals,” Kleis said. “And we achieved them much earlier than expected. But we don’t stop there. We want to continue to create greater efficiency and be able to produce more energy with renewable energies.”

“If we can do this for buildings in our city, when could we achieve this as a community?” He asked.

St. Cloud installed its first biofuel generator – a fuel derived from organic matter – in 2017 and a second in 2020. The equipment harnesses the decomposition of human and food waste, where microorganisms consume carbon and create carbon. methane, which can be burned to produce renewable energy.

High-strength waste from local businesses not only helps the city create its own energy, it saves those businesses money.

“It’s really a win-win opportunity for industries in our area because they can bring it here without having to ship it somewhere and pay probably 100 times what they’re paying here,” Tracy Hodel said. , director of public services at St . Cloud.

Cold Spring Brewing partnered with the city to pay for the second generator, Hodel said, because the cost savings allow the company to invest in additional growth.

“Taking all this high-demand waste can create jobs,” Hodel said. “Not only is this the best approach to managing it environmentally, but it also creates an economic impact.”

The facility’s other unique program is the recovery of phosphorus from food scraps, detergents, and human waste to create two types of fertilizers, while dramatically reducing the amount of phosphorus that enters the Mississippi River.

The first product is a liquid fertilizer that the city injects into local fields. The second is a by-product called struvite, which can be sold to consumers for use as plant fertilizer. St. Cloud is the first processing facility in the state to manufacture struvite.

Future initiatives underway at the facility include the use of renewable hydrogen and carbon capture. The facility plans to produce clean hydrogen and pure oxygen onsite, by running water through an electrolyser that uses renewable electricity to split the H2O molecule into hydrogen and oxygen.

The facility could then use hydrogen to power its generators or as a heat source. The oxygen would be used for wastewater treatment, saving energy by using less electricity to pump pure oxygen through the aerators compared to ambient air which only contains about 20% oxygen. oxygen. The aerators are large open-air storage tanks where oxygen is added to waste from Saint-Cloud and surrounding towns to stimulate the biodegradation of organic matter.

“It sounds like science fiction,” Kohlasch said. “But really, we’ve been producing hydrogen for decades and decades. We’re just making sure we’re producing the most climate-friendly hydrogen possible.”

St. Cloud is also partnering with England’s Clarke Energy to create a pilot program to capture carbon from exhaust gases, which would make it the first program in the country to do so.

To kick-start the community-wide transition to renewable energy, the city plans to install an electric vehicle charging station at a local park this summer. The city is also hosting an electric vehicle exhibit on July 9 at the River’s Edge Convention Center.

St. Cloud is one of at least two dozen Minnesota cities with community-wide greenhouse gas reduction goals. Kohlasch said the MPCA is working to share St. Cloud’s renewable progress with other communities.

“Hopefully we can build on what St. Cloud has learned,” he said, “and make this kind of approach the norm rather than the exception.”