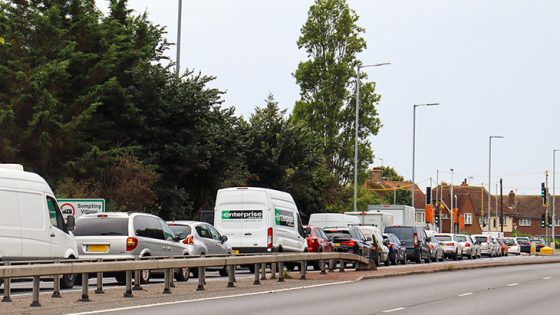 It comes after Transport for South East (TfSE) tabled ambitious plans to ease congestion on the A27 in the South East by creating the UK’s longest road tunnel.

TfSE’s plan further states that when congestion builds up on the A27, “traffic will move away from the A27 to alternative routes less suitable for high volumes”. The tunnel is designed to solve this problem as well as to reduce congestion on the A27 itself.

The plans were backed by Worthing Borough Council council at a meeting earlier this month.

Former British Tunneling Society president Grose said NCE that there were no technical reasons against carrying out the plans to divert traffic from the A27 via a tunnel.

Grose, former director of Arup and responsible for creating and leading their tunneling division, said: “A 4 or 5 km tunnel in Worthing would be relatively straightforward. We don’t have long road tunnels in the UK because we don’t need them.

“If you were to build a 4km tunnel and put it on a chart of road tunnels around the world, it would number around 500.

“From a technical point of view, it doesn’t seem like a crazy idea at all. Tunnels have been built along the south coast for years and years, it’s not geologically complicated.

Grose also thinks the UK will look to build more tunnels in the future due to the “missing” space above ground.

He said: “The reason why tunnels are likely to become more common is partly because we are running out of space. We have to go down instead of building things on the surface.

“Partly because people are valuing the earth more and more on the surface and that tends to make people want to drive underground for one reason or another.”

Plans for the road tunnel would see the project delivered between 2045 and 2050 and cost around £2billion as part of TfSE’s strategic investment plan for the South East.

Aecom technical director Patrick Cox said there was “a lot to like” about the plan.

Cox – who is also a member of Think Deep UK, a group which lobbies for more investment in underground infrastructure – said: ‘If you think about what has become the norm elsewhere, it is wrong that a tunnel of 4-5 km here is considered innovative. There’s a lot to like about the plans.

“I live not far from Worthing and I often take the road. Every time I take it I know there will be congestion. There is a community and societal need for congestion to be resolved in the region.

“There is very little chance of anything else being done, but the plans are still speculative. Personally, I think it would be fantastic to see it become a reality.

Despite support from local politicians and engineers, the environmental impact of the project has been questioned.

He said: “We have serious concerns about the strategic investment plan. It’s a dead cat story. TfSE deviates from the fact that it does nothing in the short term.

“We are in a climate emergency and need to start reducing carbon emissions. Building bigger roads leads us in the wrong direction.

“We don’t have time to think that we’re going to keep building roads at the moment and then do something in the future.”

Despite Todd’s concerns, Grose and Cox believe the tunnel could have a positive impact on carbon emissions in the region.

Cox said: “The tunnel is far more valuable infrastructure than, say, an airway or a roundabout.

“Of course, creating the tunnel consumes resources, but it creates community benefits and reduces impaired air quality due to congestion. It also removes noise pollution from the airspace.

Other TfSE-backed projects include a £3.2bn extension of the Elizabeth line to Ebbsfleet and beyond to Gravesend, and a proposed £4bn underground line to link Southampton and Portsmouth.