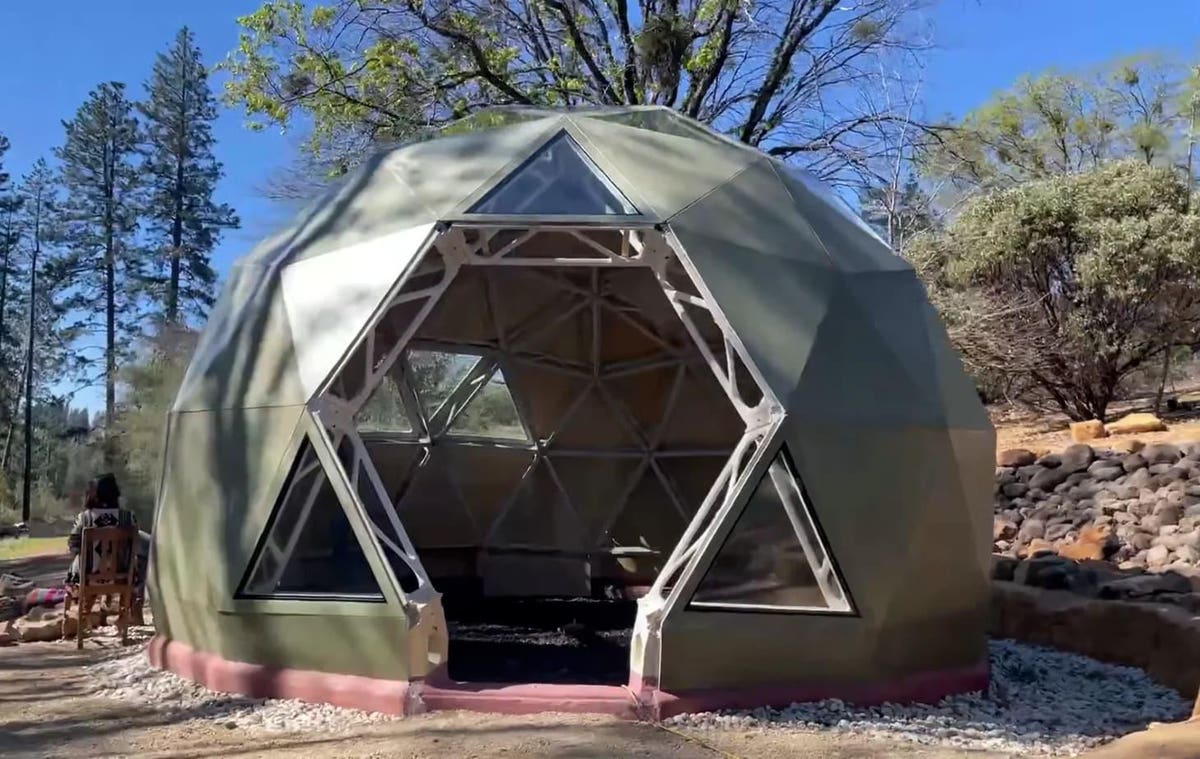 About two years ago, I wrote about a crowdfunding campaign to create affordable, green, modular, community-centered housing: Geoship. Now that dream has manifested into an actual physical prototype, and the company has raised over $1.5 million, taken over 500 pre-orders, and is aiming for mass production in two to four years.

“We kind of innovate on three different levels at once, which is a bit unusual,” CEO Morgan Bierschenk says in a recent TechFirst podcast. “We are developing materials science, product design and manufacturing technology, sort of all at once.”

We are in a difficult housing situation at the moment. Prices have skyrocketed during the pandemic, and now, as home sticker labels are starting to drop, high inflation is making them less affordable. Additionally, the homes we traditionally build have a huge carbon footprint, aren’t particularly green in terms of materials or lifetime energy consumption, and serve more to separate and demarcate people than to bring them together.

Geoship’s bold vision is to solve all these problems with a carbon-neutral, non-polluting building material – bioceramics – that can be manufactured in local micro-factories close to where people need it, assembled simply and at lower cost by the owners themselves, placed in conjunction with other domes for modular and expandable living space, and integrated into communities rather than on individual plots.

Absolutely. But that doesn’t mean impossible.

It starts with the material, which Geoship has spent years perfecting.

The chemically bonded ceramics the company uses, he says, are a new family of materials related to geopolymers. It is like a ceramic in that it is highly crystalline, but like a cement in that it is activated by water. The thick walls are very insulating, do not burn, rust or rot.

Scratch it or damage it? Just mix another batch of bioceramics and fix your home.

The dome shape isn’t just for the cool factor. It is an important element of energy efficiency and manufacturability.

“This prototype we installed has an isolation cavity about 10 inches thick,” Bierschenk told me. “So that’s a high R-value. And then also the ceramic reflects about 80% of the radiant heat. So that’s efficient, [creating] insulating effects in this way. And then also the dome shape just reduces the area by about 30% to 50% compared to a rectangular structure.

“The reason we’re doing this in the first place has a lot to do with building the village, doesn’t it?” he says. “There are so many of us today, myself included, who have kind of been looking for your village… looking for your tribe of people that you want to build community with and really connect with the land and having a place where your kids have lots of aunts and uncles around, and a village to welcome them into their home for many generations into the future. So that’s definitely a post-climate change utopian future… and, you know, whether it’s dystopian or utopian really depends on what we’re focusing on now.

The small prototype dome is about 18 feet in diameter. The largest dome Geoship has planned will be 30 feet in diameter, which Bierschenk says will provide about 700 square feet of living space downstairs and another 300 upstairs. Combine two and you have a 2,000 square foot home. Hang a small one at an angle and you have a media room, office, workshop, master bedroom, or whatever you want.

Ultimately, the configuration of large and small domes people want will be up to them.

“You can have one large dome that has up to five smaller domes connected to it, or all of these constellations,” Bierschenk explains.

The manufacturing goal is as ambitious as the structures themselves. Ultimately, Bierschenk sees locally distributed, highly automated micro-factories that manufacture components that are flat-packed and shipped to nearby residential sites. There will be Geoship-certified installers, but the idea is that “builder owners” can do construction on their own domes.

The process should be basically similar to assembling an IKEA piece of furniture: pre-made pieces that can only fit together one way.

The components will all be roughly the size and weight of concrete blocks — think Allan blocks — which are produced in huge quantities: 500 billion last year in the United States alone, Bierschenk says.

And they have similar levels of manufacturability:

“If we put the kind of innovation that has been introduced into concrete block making over the last hundred years into ceramic domes, we could… 500 billion concrete blocks would be like a billion houses produced in a year, if we can get there,” Bierschenk said. “It’s like scalability is kind of on another level from what we think is what’s possible today with the technologies of the building.”

Homes won’t be cheap to start with: starting prices around $160/square foot. But Bierschenk says with scale, that could drop to a third — just over $50/square foot.

If Geoship can realize this vision, it could be important in solving the housing crisis. And perhaps also our environmental crisis.

To subscribe to TechFirst here; obtain a full transcript of our conversation.