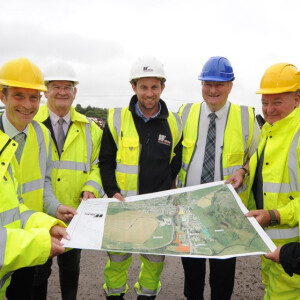 They received an update on the extensive project, which started in May 2021 and is already protecting residential and commercial properties near the Afton Water and the River Nith. The works comprise a combination of engineering measures including 900m of earth embankments, 1200m of reinforced concrete walls and 600m of bank reinforcement.

Phase two of the project, due to the extensive and complex nature of the work, has been divided into six main work areas – south of Afton Bridgend; both sides of the river north of Afton Bridgend; the car park for shops; reinforcement of the embankments as part of the development, which has been completed; the wall behind Miller Road, which has been completed; and the clearing and protection of the shoreline at Castlemains Farm.

The original plan was for each phase to be completed in order, but the global shortage of materials experienced last summer impacted the project, with work being rearranged, where possible, and some phases being completed earlier. sooner than expected. The shortage of concrete in particular has led to an unavoidable delay and the project is expected to be fully completed by February 2023, just two months behind schedule.

Councilor Neal Ingram said: ‘It was great to welcome Allan Dorans, MP for New Cumnock and to receive a detailed update on phase two of the £8.97million flood protection scheme from from the Ayrshire Roads Alliance and our main contractor. This program is so extensive that it is one of the few nationwide to be modeled on a two-hundred-year flood event plus climate change.

“Phase 1 of the program which has been completed at Leggate is already providing protection for residents there. While SEPA in conjunction with the program has made improvements to the Nith River with their embankment removal works and that has already increased the storage capacity in the Nith so it is already lowering the levels of Afton water during rain events prior to the regime being fully completed.

“No one would ever want to see a repeat of the devastating floods of 2013 and 2015 or the grief they caused so many good people. This extensive program will help protect the village from the devastation of the floods and bring safety to the local community It also means local residents and businesses will be able to purchase buildings insurance, which is truly life changing.

Allan Dorans, MP for Ayr, Carrick and Cumnock, added: ‘I was delighted to receive a comprehensive briefing on the progress of the New Cumnock flood protection scheme from Ayrshire Roads this week. Alliance and leading contractors Wills Bros.

“The works were a challenging civil engineering project which successfully overcame a number of significant hurdles including the need to reroute a major gas line and other utilities.

“My thanks to the Ayrshire Roads Alliance and Wills Bros for the progress made to date and I look forward to the successful completion of the project early next year.”