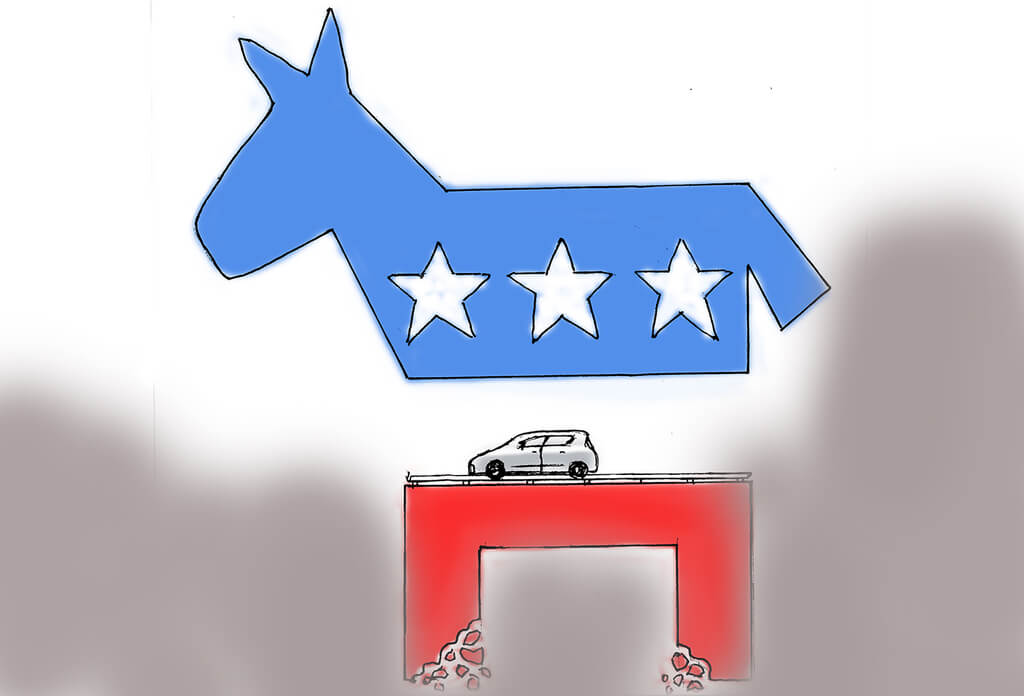 The Opinion BDN section operates independently and does not set newsroom policies or contribute reporting or writing articles elsewhere in the newspaper or on bangordailynews.com.

Ramesh Ponnuru is a Bloomberg Opinion columnist. He is editor-in-chief of the National Review and a visiting scholar at the American Enterprise Institute.

The political maneuvering on infrastructure is getting pretty bizarre, with President Joe Biden first applauding a bipartisan bill, then threatening to veto it, then resuming the threat of a veto within two days. When the action on stage becomes difficult to follow, it can be useful to revisit the main characters and their motivations.

The 21 bipartisan Senate negotiators want their bill passed not only because they believe it would improve the country’s roads and bridges, but because it would reduce the likelihood of Congress taking two more steps: passing a bill. Democratic law that spends additional trillions on child care and raises taxes, and weakens filibuster.

Senate Majority Leader Chuck Schumer had planned to spend June building the case against filibuster, as The New York Times reported. He would introduce one attractive piece of legislation after another – especially a bill that would supposedly “protect voting rights” – and then blame their demise on the excessive use of tactics.

The infrastructure agreement thwarted this plan. The Senate ended its June business by demonstrating that a significant number of Republicans are prepared to legislate, not just obstruct, and that the chamber can work without having to change its rules.

Progressives and most Senate Democrats, meanwhile, fear that the moderate Democrats in the bipartisan group will indicate that any success on the infrastructure bill would be a reason to scale back or move away from the second bill. spending bill that Senator Bernie Sanders, chairman of the budget committee, is preparing.

One theory of Biden’s behavior, based both on reporting and discussions with Senate advisers, is that the White House was taken by surprise when the bipartisan group struck a deal, felt compelled to do so. approve, then was burned by progressives. To appease them, he blurted out that he would not sign the bipartisan bill without signing the second “in tandem”. But that infuriated moderate Democrats, so he had to back down.

House Speaker Nancy Pelosi is keeping the pressure on the moderates, however, saying she will not allow the House to vote on the bipartisan bill until the Senate passes the partisan bill. It is a strategy that will require stubbornness.

It will take weeks to convert the bipartisan agreement into legislative language. Developing the Sanders Bill and clearing procedural hurdles will take months. Democrats don’t even agree on the price yet: He threw $ 6 trillion, while Senator Joe Manchin spoke of $ 2 trillion. Even in today’s Washington, that’s a big difference.

Most Republicans in Congress are watching the Democrats’ internal bickering from the side. They oppose the two spending bills.

They think we’ve spent enough money over the past two years as it stands – COVID legislation alone has added more than $ 5,000 billion to federal debt – and also want to deny Biden legislative victories . They do not believe our infrastructure is collapsing and they doubt that federal infrastructure spending is going where the investment would do the most good.

They are right about that, by the way. It is true that the American Society of Civil Engineers says we urgently need more infrastructure spending. If there is a National Barber Society, they probably think we all need more haircuts. And Congress isn’t exactly focused on using an infrastructure bill to maximize the country’s productivity.

Getting a victory for Biden, preventing him from getting one, influencing the filibuster debate: these are the types of considerations that worry lawmakers. So it’s no surprise that much of the negotiation has been about arbitrary spending levels and not, say, which projects deserve funding and which don’t.

Polls suggest that the public likes the idea of â€‹â€‹spending on infrastructure but doesn’t see it as a high priority. The Democrats have decided to make this a priority issue, and now they run the risk that by taking it all in, they will get nothing.

More articles from the BDN