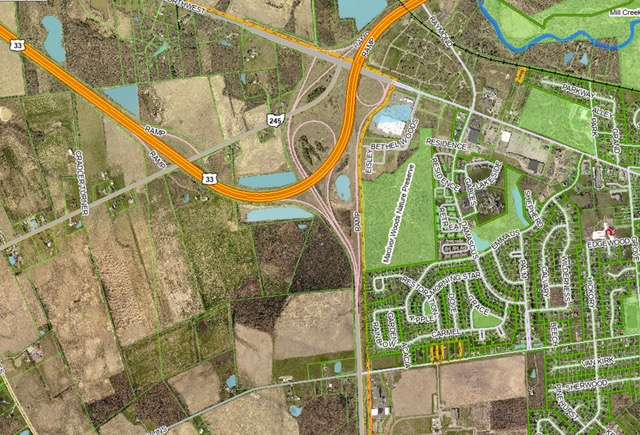 Stillwater Farms stumbles out of the gate

As expected, much of Monday’s regular Marysville City Council meeting was devoted to the proposed rezoning of seven parcels of land on the west side of town near US Route 33/US Route 36/State Route 245/State Route 4 and Northwest Parkway Interchange to make way for the more than 600-unit Stillwater Farm development that would be built just south of the highways conjunction.

Two ordinances were in the process of second reading and public hearing concerning these parcels. Interestingly, the first ordinance that would allow the city to annex more than 260 acres within the city where the proposed development would go, elicited no comment from administration, council, or the public.

The second order, however, which proposed to rezone that same 260 acres of U-1 (township zoning) to Planned Unit Development (PUD) is the one that angered a packed house of attendees at Monday’s meeting. . Eight citizens spoke out against the rezoning, and while council chairman Mark Reams asked that speakers not cover the same ground over and over again, all pointed out the traffic problems it would cause at Interchange 33 /36/245/4/NWP.

Aaron Higinbotham, who owns land just south of the Stillwater Farms project, scored points with Council and those assembled when he presented evidence that elevation, wetland protection and water drainage maps that Highland Real Estate Group (parent company of Stillwater Farms) presented to Council were woefully inaccurate. He confirmed these facts with the Union County Soil and Water District, projecting a map that showed a very different picture with respect to elevations and drainage, much like the map presented to the city by Highland. .

Other speakers raised a number of other difficulties with the development: no plans for pedestrian connectivity with the rest of Marysville; a high-pressure pipeline owned by Sunoco that will cross the development; the extension of public services from the city to the area; no direct vehicle traffic with the west side of the city; and a resident-to-acre ratio that exceeds that of Mill Valley, among others. But the common thread running through all the remarks was the problematic exchange (one resident called it a ‘joke’ and another called it ‘scary’) and the surge in traffic to be expected if more 600 new homes are being built less than a mile south of the interchange.

Another complication encountered by the Council was the most recent traffic study of the interchange. According to the Highland Civil Engineer who spoke to Council on Monday, the most recent traffic study was the ‘third iteration and second amendment’ to the original and was passed to Council and the Transport Department of Ohio that morning, giving council members only several hours to read and digest the report before the hearing. The Highland representative also admitted that a traffic light at the intersection was not justified by the ODOT if a school was to be built in the development, but that a traffic light would be justified if there was no no school built at Stillwater Farms.

To top it off, the Highland representative confirmed Mr. Higinbotham’s findings that the elevation and drainage maps for the project which were presented to Council were indeed inaccurate and stated that the Corps of Engineers of the army had been contacted for further study.

The two ordinances regarding annexation and rezoning will go through a third reading and final vote at the October 24 meeting.

In other actions, Council passed a resolution authorizing the City Manager to make an amendment to a service contract regarding the utility agreement between Marysville, Union County and the Jerome Village Community Authority that will allow the city to recover part of the money spent to establish utilities with Jerome Village.

It was clarified that these additional costs relate only to administrative costs and have nothing to do with the use or installation of public services in the area. Cost recovery will increase from $2 to $3, and the agreement will allow the city to implement a “staircase” process to collect other costs in increments of $0.25 per year that have not been refunded to the city. At the Public Safety/Service meeting that took place prior to City Council, this matter was discussed at length and the committee agreed to forward the resolution for consideration, which passed with a vote of 6 to 0 as the member Board member Deborah Groat was excused from the meeting.

An order that was lifted from third reading passed by a 6-0 vote of the Board was to allow Hardy World, the parent company of 84 Lumber, to take advantage of the community reinvestment area for a $14 million, 122,000 sq. Single story building to be built on Industrial Parkway. The owners intend to purchase the little more than nine acres on which the building will sit, which will then be leased or leased to three tenants. Marysville/Union County Economic Director Eric Phillips said the land, as it stands, generates about $250 a year in property taxes, which will increase to about $480,000 a year after 10 years once the improved area. The company is applying for a tax deduction of 75% over 10 years. The promoters agreed to launch a PILOT of $10,000 (payment in lieu of taxes) per year for 10 years at the Marysville Exempted Village School District and the Ohio Hi-Point Career Center and enter into a tax-sharing agreement with the two school boards, as well as offering internships to students. While developers want to launch the project by the end of this year and predict the building will be ready for tenants by the end of 2023, a third reading of the ordinance was overturned by a 6-0 vote of the Board so that agreements can be reached from both school districts at their next board meetings later this month. As the schools and developers have already been in touch, Phillips doesn’t expect any slowdowns along the way and the Council seemed to be on board, as building new construction along Industrial Parkway is among his plans. main concerns and objectives.

The council also heard the first reading of an ordinance amending the city code to include a Dec. 31 deadline for submitting sewage bill credit applications for the following year. This ordinance will be given a second reading and a public hearing at the October 24 meeting.

Marysville City Council will reconvene in regular session on Monday, October 24 at 7 p.m.