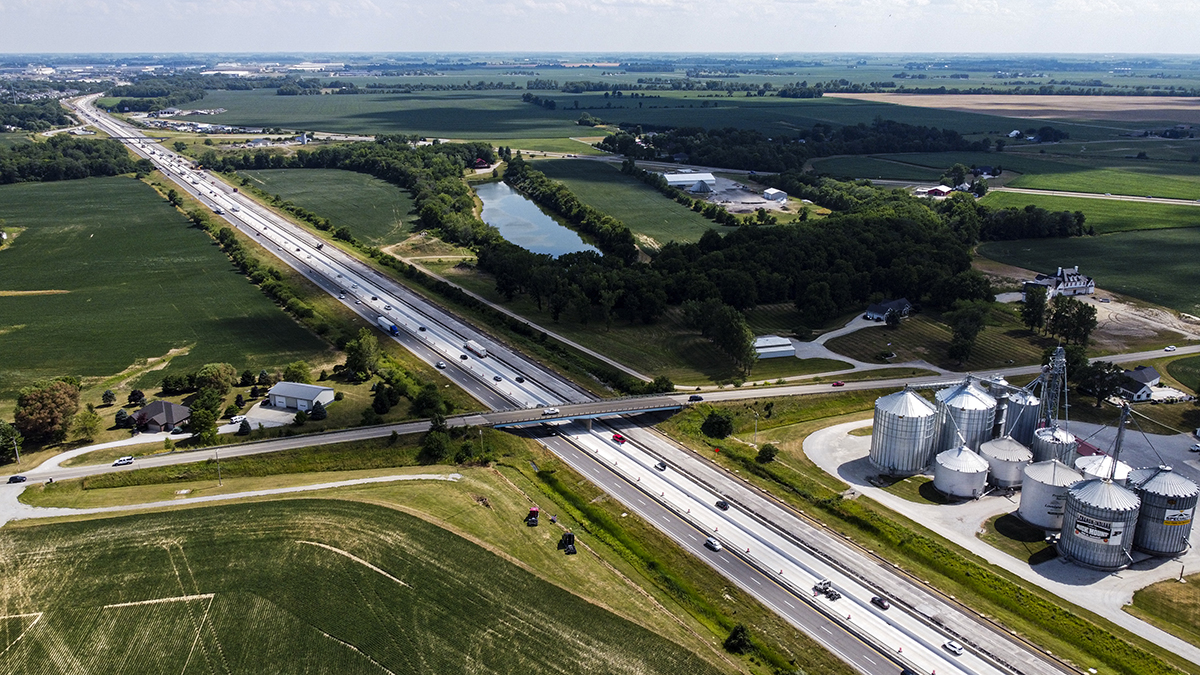 With an effort to develop an innovation and research district in central Boone County, the state’s transportation agency is moving forward with plans for an Interstate 65 exit at West County Road 300 North that would serve the sprawling project.

The Indiana Department of Transportation is also planning improvements to the existing interchange at I-65 and US 52, just south of the proposed new interchange. Although financial details have not yet been made public, the project is expected to be funded by the Federal Highway Administration.

The preparation for an exchange coincides with steps the state is taking to advance the LEAP Innovation and Research District, a project led by the Indiana Economic Development Corp. which will occupy more than 7,000 acres along the western and northern outskirts of Lebanon.

The northern section of the district, which will be anchored by a $2.1 billion advanced manufacturing project by Eli Lilly and Co. announced in May, will extend to West County Road 450 North.

Last month, INDOT informed local and state officials, as well as a handful of outside organizations, that it was making improvements to the I-65 corridor. In its notification letter, the agency said the project was driven by the Boone County Innovation and Continuing Growth District.

“The purpose of the proposal [interchange] The project is to provide improved mobility and direct access to areas east and west of I-65, North Lebanon, including planned future land uses,” the June 21 correspondence reads. . “Additionally, the purpose of the proposed project is to reduce future traffic congestion that is expected due to planned economic development” in these areas.

The INDOT letter, authored by Matthew S. Coon, Acting Director of INDOT’s Environmental Services Cultural Resources Office, came around the same time that IEDC began moving forward. with a petition to annex to Lebanon about 56 properties that will be part of the LEAP district. This process is ongoing.

INDOT said American Structurepoint Inc. and Weintraut & Associates are handling environmental due diligence for the project. These companies are based in Indianapolis and Zionsville respectively.

INDOT’s director of public relations, Megan DeLucenay, declined to discuss the project in detail, noting that INDOT is in the “very, very early stages” of planning.

“At this time, we have not identified any design elements or timelines, but we will update the public on any updates once they are decided,” DeLucenay said, referring additional questions to the letter sent by Coon.

IEDC said the LEAP project will include other road and infrastructure improvements, including State Routes 32 and 39 and US 52. The project is expected to take decades, with sections built in phases as it unfolds. as users express interest.

Despite the promise of new, high-paying jobs – the average salary for the 500 people expected to be employed by Lilly’s development alone will be around $95,000 – some nearby residents aren’t thrilled with the expected increase in traffic.

Lin Ellis has lived for 20 years in a house on West County Road 450 North, and his property is across from Lilly’s planned facility, about 1 1/2 miles north of the proposed interchange.

Ellis, who trains horses, said she had worked for Lilly in Indianapolis for 40 years and was worried about the impact the development – and the exchange – will have on traffic and her business.

“It would impact me, and it would impact people who come directly to my ranch because there will be more traffic and a different setup,” she said. “Obviously I moved here because I didn’t want traffic.”

Even before the LEAP project, there were discussions about adding an interchange in North Lebanon, with INDOT considering either the CR 300 North or the CR 450 North.

Boone County Commissioners Chairman Jeff Wolfe said those talks go back several years, but he’s not sure if the current plans are consistent with previous considerations.

“There were drawings and proposals made a few years ago, and then at that time it was decided … not to do it, but it came back,” he said. Wolfe added that most residents have been so enamored with the Innovation District plans that they have generally overlooked the exchange plans.

Lebanon Mayor Matthew Gentry and many county officials have generally supported adding an interchange at CR 300 North. Gentry could not immediately be reached for comment on this story.

An interchange project can take as little as three years and up to 10 years, from the time it is designed to the time it opens – it all depends on the project.

INDOT has not yet determined exactly how much land or what parcels might be needed for the exchange, but it is possible that the agency could use eminent domain to purchase the land if the owners are unwilling to negotiate a settlement. sale by themselves. The process allows a government entity to compel landowners to sell at fair market value land needed for a project in the public interest, such as transportation or infrastructure.

The Dean and Mary Jackson family, who own much of the land on the north side of CR 300N, east and west of the highway, have agreed to sell some 136 acres in that area for use in the LEAP district or interstate project. , or both. The Jacksons are among more than 30 landowners who have agreed to sell their land to the state and have it annexed to Lebanon.

However, the state did not specify whether it also needed other plots for the exchange project.

An IBJ analysis of the area found that at least seven single-family homes and a large farm would be consumed by the interchange project, assuming a typical four-legged design with on and off ramps in each direction.

This does not include a large single family home under construction within 800 feet of the CR 300 North overpass.

“Engineers are going to have to figure out how much they need and then work with landowners to come up with something fair and equitable for them, beyond current farm prices,” said Mike Horrigan, a land broker with the office of ‘Indianapolis of the South Bend brokerage firm The Bradley Co.

“The state knows very well what it needs to do when making improvements along highways and state roads,” he said.

Phil Beer, owner of Indianapolis-based civil engineering firm USI Consultants Inc., which has worked on several exchange projects in Indiana and beyond, said that once the environmental impact study is completed – it has already started – the State will have to investigate further the public services and the traffic account. He said funding is sometimes a stumbling block for exchange projects, but once it’s secured, work moves along pretty quickly.

National and local authorities will want to “move as fast as possible, but there are certain regulations, certain hurdles, that they will have to jump through”, he said. “Whenever there is a big development going on, [understanding] how the traffic will move” must be part of the conversation.

Doug McCoy, director of Al and Shary Oak real estate at Indiana University, said the addition of an interchange in North Lebanon is not surprising given the large-scale investment that the plans for the region. He added that while such a project could cost tens of millions of dollars, it is “extremely important” to LEAP’s long-term success.

“Without access,” he said, “a project probably won’t work, it won’t happen. It’s about getting people in and out. »

McCoy said Lilly and others’ decision to expand at the site is likely to hinge on an additional interchange.

Horrigan agreed, adding that accessibility will be key for the project to attract users and stimulate further growth in and around Lebanon, whether associated with LEAP or not.

“If you look at what Indiana is trying to do, in terms of creating more jobs and different types of industries, [the interchange] will be a great advantage,” he said. “They’re trying to create something that’s going to compete with areas like the North Carolina Research Triangle Park. They want to create an environment like that, and that’s one of the first steps. »•