CAMP ZAMA, Japan – A pair of commands changed hands Tuesday at US Army Japan headquarters, southeast of Tokyo, one for the garrison and one for the Corps of Engineers.

Colonel Thomas Matelski handed over control of the US Army garrison in Japan to Colonel Christopher Tomlinson, a former enlisted soldier and company commander in Iraq. During this time, command of the Army Corps of Engineers, Japan Engineer District, changed from Colonel Thomas Verell to Colonel Gary Bonham.

Matelski at the ceremony reflected on the challenge presented by the coronavirus pandemic, which has consumed nearly half of his three-year tenure.

“Although my time in command has been one of the most difficult of my career, it has also been the most rewarding,” he said, according to an Army press release. “Japan and the Japanese people have taught me so much. I have traveled the world during my career in the military… but I have never found a culture and people that my family and I have appreciated so much.

A native of Racine, Wisconsin, Matelski moved to Indo-Pacific Command in Hawaii to become leader of the Civil Affairs Planning Team, J9.

His handling of the pandemic at facilities in Japan drew praise from Craig Deatrick, director of Facilities Management Command – Pacific, the reviewing officer at Tuesday’s ceremony.

Matelski “has guided the community through the associated challenges, developing a strong and effective communication strategy, helping to keep soldiers, families and civilians safe and informed of the latest directions and directions,” Deatrick said, according to the press release. “Despite the challenges posed by the pandemic, Colonel Matelski has consistently improved his relationships with senior officials and foreign dignitaries here in Japan. “

U.S. commanders of facilities in all branches across Japan are responsible for preventing the spread of COVID-19, the respiratory disease of the coronavirus, in their populations.

The Army Garrison Commander is responsible for the headquarters post and 15 other army installations across Japan, and the support they provide to 12,000 military personnel, Ministry of Defense employees, families and Japanese employees. 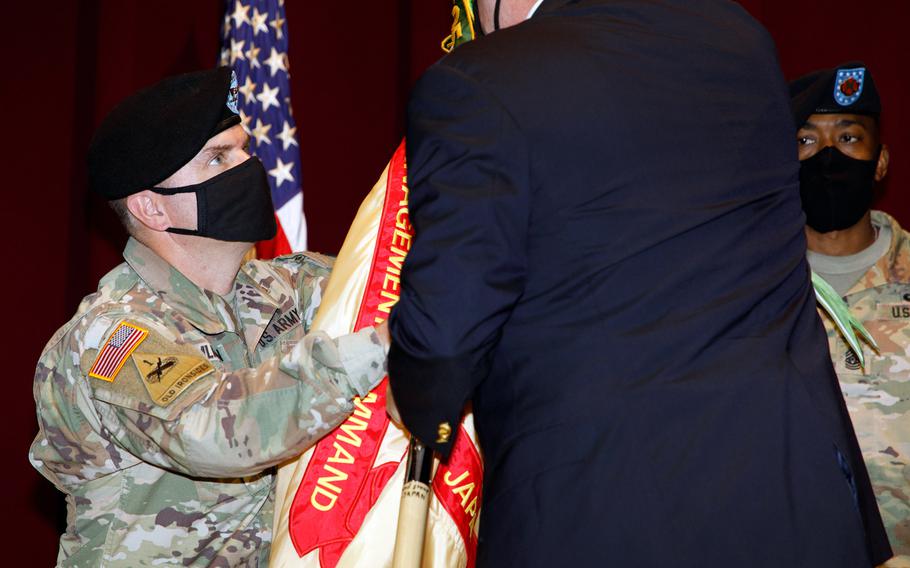 Between March 2020 and May, the US military in Japan reported that at least 99 cases of coronavirus had appeared on its posts.

Tomlinson, the new garrison commander, is from Gruver, Texas. He served four years in the ranks, then graduated in 1996 with an ROTC commission from Texas Tech University. From there, he became an infantry, airborne and military intelligence officer and ranger, according to the military.

His service abroad includes stays in Germany and Iraq. Previously, he was in command of Fort Belvoir, Va., And comes to Japan from the Pentagon’s J-2 Joint Chiefs Directorate, where he served as deputy director of intelligence at the National Military Command Center.

At the Corps of Engineers ceremony, Bonham took charge of the Pacific’s largest district.

A native of Reno, Nevada, Bonham received an ROTC commission and a bachelor’s degree in civil engineering in 1994 from the University of Nevada, Reno, and has held positions in Germany, Hawaii, California and New Mexico.

He comes to Japan from the Defense Threat Reduction Agency, where he was Deputy of the Enabling Capabilities Department, Research and Development Directorate. He was also director of the agency’s National Assessment Group.

The engineering district employs about 460 people, including U.S. and Japanese civilians, and provides peacetime and emergency engineering and construction services to the U.S. military, according to the district’s website. It manages the largest Corps of Engineer design and build program funded by a host nation.

One of his projects is a new 9,100 square foot flight simulator for the CV-22 Osprey being built at Yokota Air Base, the headquarters of US forces in Japan in nearby western Tokyo.

The structure, scheduled to open in September 2023, will support the region’s only full-motion Osprey simulator, according to the Japan Engineer District. The Osprey is a tilt-rotor aircraft with vertical and short take-off capabilities.

The Air Force began construction in December 2019 of a $ 63 million facility in Yokota for the 21st Special Operations Squadron, which operates the tilt rotors there.

Stars and Stripes reporter Joseph Ditzler contributed to this report.