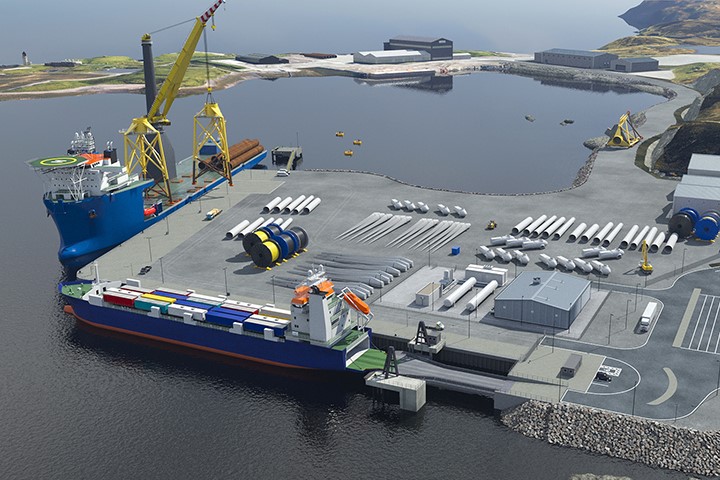 McLaughlin and Harvey were appointed to build the multi-purpose terminal on the Isle of Lewis in April this year.

The deep-sea terminal will improve facilities for large vessels that cannot currently dock at the terminal, such as onshore and offshore wind farm vessels and large cruise liners.

Stornoway welcomed 43 cruise ships in 2017, but attracts relatively few large ships, as those over 156m in length cannot dock and passengers are brought ashore by small dinghies.

The terminal will increase the capabilities and flexibility of the Arnish fabrication yard in Stornoway.

McLaughlin and Harvey began piling work along the linkspan quay earlier this month, after the piling plant and crane were mobilized to the site in October. It will install a total of 140 tubular steel piles and 270 sheet piles to form the quay walls.

The tubular piles have a diameter of 1,200 mm and a length of between 27 and 30 m, each weighing approximately 20 t. To ensure that the piles are positioned in the correct place, they are placed in a metal frame called a pile gate.

The gate takes four tube piles and ensures that they remain vertical when driven into the seabed. Once all four piles have been driven to the required depth, the pile gate is moved to the location of the next set.

The space between the tube piles is filled with steel sheets, which are inserted into guides on the side of each tube pile.

Two Liebherr cranes shipped from Europe in sections and built on site were used to install the piles. The LTR 1100, 100 t caterpillar with telescopic boom, is a support crane. It lifts the access platform for engineers.

Last month, the contractor announced that all steel pile material, totaling 4,500t, had arrived on site and had been delivered by ship from Europe.

To prepare the site for the reclamation works, McLauglin and Harvey have also started to build rock bunds that will surround 6.5 ha of seabed.

This month, McLauglin and Harvey will continue to install piles along the north quay wall, as well as blasting and placing material to extend the rock platforms. It will also start constructing the link road along the shoreline to the Arnish industrial area.

The Port Authority has worked with the Scottish Government, Scottish Futures Trust, Highlands and Islands Enterprise and Comhairle Nan Eilean Siar over the past four years to develop the project.

The terminal is a key part of the Islands Growth Deal signed in March 2021, which outlines plans for the UK and Scottish governments to each invest £50m in Orkney, Shetland and the Outer Hebrides.