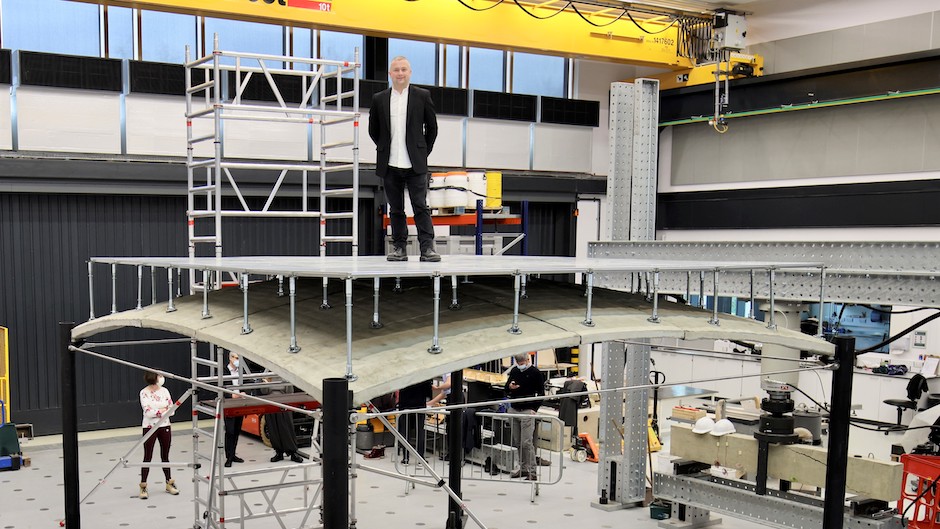 Soils with “thin shell” could reduce the carbon in construction

British researchers have created a new style of vaulted floor that could reduce the use of concrete and help reduce the construction industry’s carbon footprint.

The ‘thin shell’ vaulted floor was developed by a team of structural engineers, mathematicians and manufacturing experts from the universities of Bath, Cambridge and Dundee. Compared to a traditional flat floor, the innovation would use 75% less concrete and 60% less carbon in its construction.

Dr Paul Shepherd, Principal Investigator for ACORN and Reader in the Department of Architecture and Civil Engineering at the University of Bath, said: “Achieving the net zero targets recently ratified at COP26 will require significant changes to the share of the construction industry, which is responsible for around half of the UK’s total emissions.

“Given that concrete is the most consumed material in the world after water, and its production contributes more than 7% of global CO2 emissions, the easiest way for construction to begin its journey to zero net is to use less concrete.”

Currently, most building floors use thick flat slabs of solid concrete, which rely on the flexural strength of concrete to support loads. Concrete is not good at resisting the stress induced by bending, so these floors need steel reinforcement. Instead, ACORN’s approach is to use concrete for what it does best: resist compression.

By placing the material only where it is needed and ensuring that it works in compression, the ACORN design uses less concrete. The researchers noted that the form may prove impractical to achieve using traditional temporary forms, so they also developed an automated adaptable mold and robotic concrete spraying system that can be used in a construction environment. off-site factory.

Along with this new style of manufacturing, the team developed bespoke software to optimize floors for a given building design and control the automated manufacturing system to produce them.

Since the floor is fabricated off-site, it must also be transported to the site and then assembled. The team divided the large floor into nine transportable pieces and developed a connection system to fit the pieces together.

The ACORN team said they have also incorporated reversible joints, so the floor can be dismantled and reused elsewhere at the end of the building’s life, promoting a circular economy in construction.

The practicality of the system has been demonstrated to industrial partners ACORN realizing a building shell thin-size of 4.5 mx 4.5 m in NRFIS Laboratory of Civil Engineering Department of the University of Cambridge.

According to the team, early results suggest that ACORN’s approach can generate “significant carbon savings”, with future research likely to lead to more as processes are optimized. Each piece took only half an hour to make despite being the first of its kind, and the whole floor took a week to assemble – future commercial versions could be made faster in dedicated industrial facilities, according to the researchers.