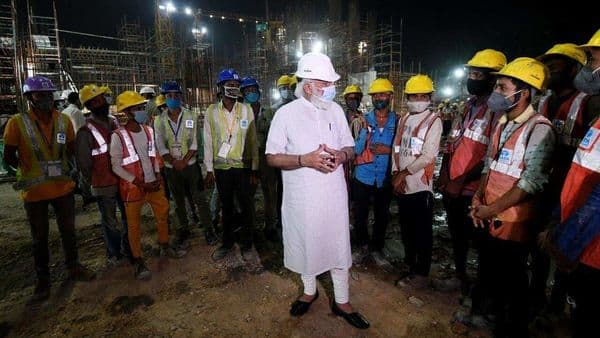 Prime Minister Narendra Modi visited the construction site of the new parliament building in New Delhi on Sunday around 8:45 p.m. He spent almost an hour at the site and did a first-hand inspection of the building’s construction condition.

The construction of the building is part of the Modi government’s ambitious Central Vista project, which aims to redevelop a 3.2 km stretch in the heart of Lutyens Delhi built by the British in the 1930s.

Several photos showed PM Modi performing the first-hand inspection of the construction site, which is expected to be completed by next year.

The redevelopment of Central Vista, the country’s electricity corridor, includes a new parliament building, a joint central secretariat, the rehabilitation of the 3 km Rajpath from Rashtrapati Bhavan to India Gate, the new residence and office of the Prime Minister, and a new Vice President Enclave for a total cost of approximately ??20,000 crores.

In 2019, the central government announced the redevelopment project to give a new identity to India’s “power corridor”. The plan calls for the construction of a new parliament, residences for the prime minister and vice-president, and 10 building blocks that will house all government ministries and departments.

The project, which is expected to be completed by 2024, is being executed by the Union’s Ministry of Housing and Urban Affairs.

On February 4 this year, the Bhoomi Poojan ceremony at Central Vista Avenue was celebrated by then Union Minister of State Hardeep S Puri and other senior ministry officials at India Gate in New Delhi.

With this ceremony, work began for the Development / Redevelopment of Central Vista Avenue.

According to a press release from the Ministry of Housing and Urban Affairs, Central Vista Avenue runs from the north and south blocks to India Gate. It includes the Rajpath, its adjacent lawns and canals, rows of trees, Vijay Chowk and India Gate Square which stretches for 3 kilometers. This was originally designed to be a large processional path leading to the viceroy’s house during the British Raj. It was appropriated by the Indian people and their government at independence.

With contributions from the agency

* Thank you for subscribing to our newsletter.