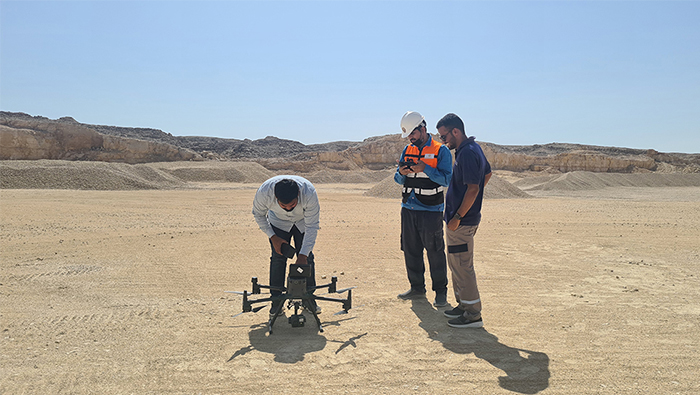 These experiments are part of the empowerment of entrepreneurs and the opening of opportunities for Omani youth to develop their skills and capacities in this field and to carry out their experiments in the area designated by Opaz for of artificial intelligence, which covers an area of ​​18 square kilometers. in the zone.

Opaz, in cooperation with Marmul Integrated Company, has recently successfully implemented a number of experiments and aerial surveys using drones at one of Sezad’s mine sites and positive results have been achieved which have helped to make appropriate decisions aimed at improving productivity and good planning of quarries and mining sites in addition to deepening knowledge on safety and security aspects and inventory management.

Ahmed Al Farsi, the chairman of the steering committee to oversee the artificial intelligence area, said drones are one of the techniques of the fourth industrial revolution that mining survey experiments using drones have been carried out to collect aerial data from mining sites to be processed by specialized programs and formed into 3D maps of these sites. She added that the most important result of these experiments is the creation of a scientific database that improves knowledge of mining research areas. This experiment demonstrated the ability of this type of drone to monitor civil engineering works in a scientifically efficient way and to produce complete or partial panoramic images and 3D models of the target terrain.

On the other hand, Hussain Habib Al Lawati of ESBAAR company, which specializes in providing artificial intelligence and drone services, said that ESBAAR has benefited greatly from the opening of opportunities in this field, and has congratulated that Opaz has designated a special area for artificial intelligence with a large space that allows specialists to launch their projects, works and experiments. Opaz’s efforts in this area are remarkable and we had the opportunity to learn more about special economic zones and free zones, available investment opportunities and business opportunities with beneficiary organizations and companies. of the area. In addition, the meeting with entrepreneurs and companies specializing in the field of drones, allowed us to share information, discuss challenges and learn about Opaz’s projects to facilitate the work of investors and entrepreneurs.

Al Lawati added that after carrying out the drone experiments in special economic zones and free zones, we have noticed an increased demand for aerial surveys from investors and engineering consultants in Duqm in particular, and that is an indicator of the success of the experiments, of which we are proud. of. We are also grateful for Opaz’s contribution in promoting ESBAAR services, he said. He added that they have received many requests from Oman and abroad, and recently from South Africa, to carry out aerial surveys of usufruct lands in Duqm.

He added, “ESBAAR has carried out a variety of work in Opaz-affiliated areas, and our technologies have been used in inspection work in the Sohar Free Zone, as well as in the examination of thermal towers – or what so-called toxic gas incinerators – in the refinery, as well as various geological prospecting and 3D modeling work for the buildings and assets of Duqm and Sohar.

Al Lawati concluded that the experiments carried out at Sezad involved the use of two types of drones for aerial surveys and three-dimensional modeling of the Duqm Frontier building. These experiments have contributed to increasing knowledge about the weather and nature of Duqm through data collected for similar projects. In addition, the experiments helped promote ESBAAR services in the area.