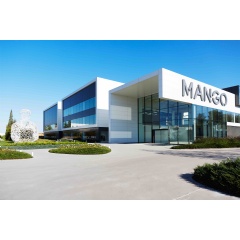 Mango, one of the main European fashion groups, ends the first half of 2022 with positive figures. The company closed the first six months of the current financial year with a 24.8% growth in turnover. The company is forecasting a year of record investment, with areas such as stores, technology and logistics as key focus areas to strengthen.

The company ended the first half of the year with a turnover of 1.214 billion euros, compared to 0.973 billion euros in 2021. Mango maintains the pace of 2021 and leaves the pandemic behind, in the first half exceeding sales for the same period of 2019.

Toni Ruiz, CEO of Mango, says that “the progress of the first half is another sign of the new stage of growth in which Mango finds itself”. “Our customers appreciate and appreciate our product and we have accelerated our expansion and made our operations more efficient,” he adds. In this regard, the company ended the first half of the year with an increase in gross operating income compared to the same period in 2021.

During the first half of the year, sales kept pace with the return to social normality and the international geopolitical situation. The period began with a new wave of the Covid-19 pandemic in Europe and was then marked by the outbreak of war in Ukraine, then by the lifting of the last restrictions in Europe and the arrival of good weather. Mango, a customer-loved brand for formal wear, capitalized on the return to stores from April and the return of social events.

Present in more than 110 markets around the world thanks to a distribution ecosystem of channels and international partners, Mango has recorded a positive evolution in the main regions where it operates, with exceptions such as Russia. In the first half of the year, the company ceased its direct activities on the Russian market, for which it set up a provision of 20 million euros.

Key regions for Mango are particularly noteworthy, including Spain and France (where the company has just renovated its flagship store in Haussmann, Paris, and plans to open 300 outlets by 2025), as well as the Kingdom UK, where the company is planning openings in sites such as the Battersea Power Station shopping center in London, and Italy, with an ambitious expansion plan, particularly in the south of the country.

The other markets in which Mango performed well were the United States and India, two of the strategic countries for the current financial year. In the United States, Mango kicked off the month of May with the opening of a flagship store on Fifth Avenue in New York, a development plan that aims to reach a network of forty stores in the country by 2024. In India, meanwhile, the company has advanced its development with its partner Myntra to 50 outlets, with an additional 15 to 20 openings estimated in the second half.

At the end of the first half, the company had a network of 2,508 points of sale worldwide, after a total of 61 net openings since last December. Mango continues to show strength in the online channel, although the strong comparable in the first half of 2021 (when major European markets still maintained restrictions on physical trade) meant that the first six months of 2022 closed with a slight decrease of 3.9%.

To support the new phase of development, the Barcelona group will accelerate its pace of investment by planning to exceed 120 million euros in 2022, which will mean almost tripling the investment by 2021. Technology, logistics, facilities and the stores will represent the bulk of the investment effort for the whole year.

At the end of the first half, Mango completed the civil works for the expansion of its logistics center in Lliçà d’Amunt (Barcelona) and began the installation of intralogistics systems. The extension, which once completed will have involved a total investment of 88 million euros, will be operational in 2023 and will allow Mango to centralize all its online operations and respond to its international development.

Another of Mango’s major projects is the construction of its new headquarters. The new Mango Campus, which will consist of renovating the current spaces and expanding with a new corporate building, will be operational in 2024.

In the first half, Mango continued to make progress on its sustainable roadmap. The Science Based Targets initiative (SBTi), an entity led by the United Nations Global Compact, validated last June that the group’s greenhouse gas (GHG) emission reduction targets are aligned with the level of ambition defined in the Paris Agreement.

In April, the company also succeeded, for the first time in its history, in linking its debt to ESG (environment, social and corporate governance) criteria. The group’s cost of debt will be reduced if 100% use of sustainable cotton, recycled polyester and source-controlled cellulosic fibers is achieved by 2025, as well as a 10% reduction in CO2 emissions from scopes 1 and 2.

In 2022, Mango reviewed the milestones set at the start of 2020 as part of its strategic plan for sustainable development and decided to move them forward. Specifically, Mango expects 100% of the polyester used to be recycled by 2025, doubling the initial target set for the same year. Likewise, the company also envisions that by 2025, 100% of the cellulosic fibers used will be of controlled and traceable origin, which means reaching the commitment five years ahead of schedule. The company also maintains its goal of using 100% cotton from sustainable sources by 2025.

By 2021, Mango has already achieved 91% more sustainable cotton use and 59% source-controlled cellulosic fiber use. In addition, 54% of the polyester used was recycled, reaching the initial goal four years ahead of schedule.

Mango makes its commitment to sustainable fashion visible through the Committed label, which includes all Mango items with less environmental impact. In 2021, garments with Committed features already accounted for 80% of total production, up from 45% in 2020. Mango aims to have 100% of its garments part of Committed by 2022.

Mango, one of the leading fashion groups in Europe, is a global company with design and creativity at the center of its business model and a strategy based on constant innovation, the search for sustainability and an ecosystem of channels and of partners. Founded in Barcelona in 1984, the company closed 2021 with revenue of €2.234 billion, with 42% of business coming from its online channel and a presence in more than 110 markets. More information at www.mango.com

This news content was set up by WebWire’s editorial staff. Linking is allowed.