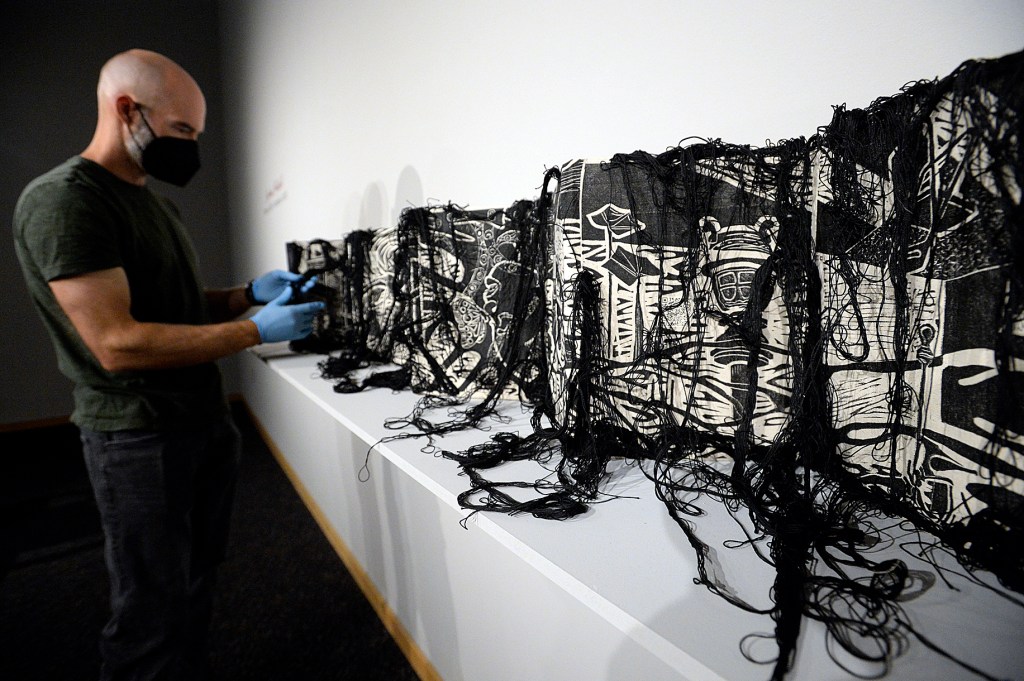 The Loveland Museum hosts an exhibit featuring works by the late Jacob Lawrence and Sauda Mitchell, an artist and archivist based in Savannah, Georgia, who uses QR codes and archival materials in her work to tell stories about the experience. blacks.

The exhibit opened on Friday during Loveland Night on the Town and will remain at the Loveland Museum until December 31.

Lawrence, who died in 2000, and Mitchell explore the causes of civil rights throughout their work, including the pieces on display at the Loveland Museum. Lawrence was one of his first inspirations as an artist, Mitchell said.

“I was really struck by the symbolism that he uses to tell stories, and it’s something that I also kind of adopted in my artistic creation,” Mitchell said.

Lawrence, whose work gained nationwide acclaim in the second half of the 20th century and has a permanent place in a collection at the Museum of Modern Art in New York City, explored contemporary and historical scenes, including the Toussaint L’Ouverture series. , which can be viewed at the Loveland Museum.

The series of prints examines the life of a Haitian slave who became a revolutionary leader during the Haitian Revolution of the 19th century. The uprising against French settlers was the first in history to result in a republic ruled by people of African descent.

One of Mitchell’s recent pieces, on display at the museum, uses his new blend of QR code technology and deep historical sources to give visitors a glimpse into his life. By scanning the codes that are embedded in the black and white color schemes of his work, the viewer is redirected to a wealth of historical sources on Lawrence’s life, including photographs, writings, letters and newspaper clippings.

“It highlights materiality and is used to note a specific place and time in history, particularly the time Jacob Lawrence spent in North Carolina,” said Mitchell, who grew up in Winston-Salem, in North Carolina. “Use materiality to locate him in a geographic location but also to talk about his experiences in the South, especially during the Jim Crow era. “

Mitchell began incorporating QR codes into her work years ago when she was doing “research aid,” which is also on display at the museum, and their increased use in the wake of the COVID-19 was an interesting coincidence.

Mitchell holds a master’s degree in information and library science with a concentration in archival studies, and continues to work as an archivist at Savannah College of Art and Design.

“Each of these prints you see in ‘Finding Aid’ was originally part of a series that I completed during my residency at Savannah College of Art and Design,” she said. “And that’s when I started using QR codes and merging them with my engraving as an access point to archival documents.”

It is Ohio’s most expensive highway construction project currently underway