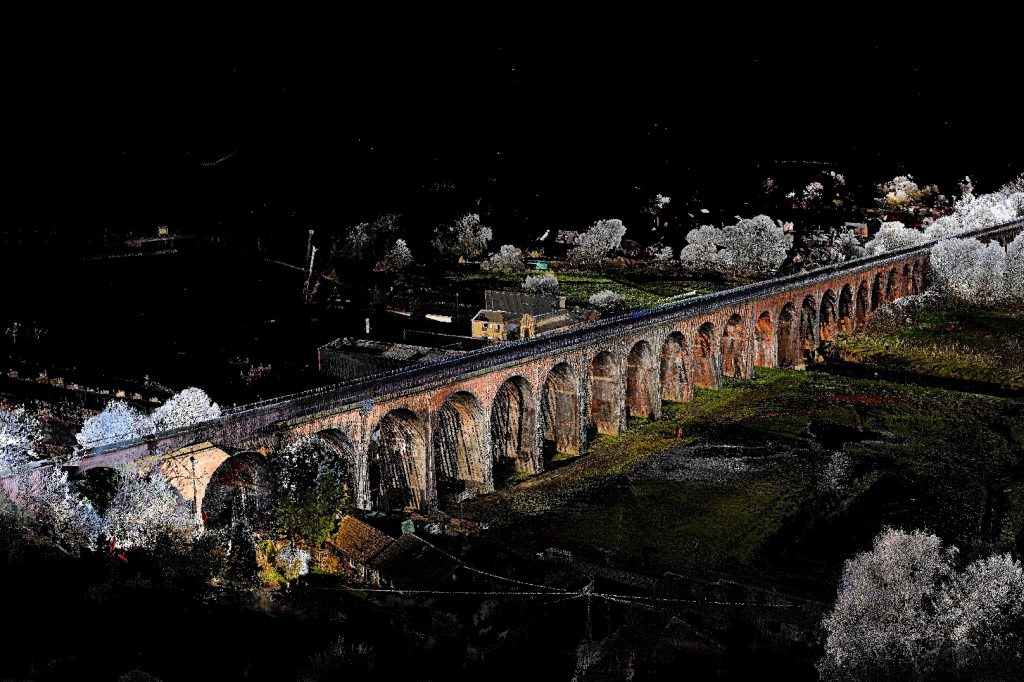 Network Rail has deployed laser scanners and drones to map every inch of the 176-year-old Whalley railway viaduct in Lancashire.

A total of 300 scans have been carried out on the 48-arch viaduct which carries the Blackburn to Clitheroe railway line for 550m across the Ribble Valley.

The scans will be used to create a “digital map” of the condition of the viaduct. Network Rail will use the digital model to plan essential maintenance over the next six to 18 months to secure the 19th century structure for the future.

Phil James, Network Rail North West route manager, said: “We are always looking to innovate on the railway and to see drones and lasers being used to take care of such a historic structure is truly impressive.

“Using this 21st century technology gives Whalley Viaduct engineers a forensic means to plan its essential maintenance for the next 18 months.

“Great care and attention is taken to ensure that our work is fair from a heritage perspective. This digital model plays a major role as we secure the future of the Grade II listed structure for passengers, local people and tourists.

As well as assessing the current condition of the bridge, the model allows Network Rail to closely monitor any changes to the structure and identify problems in the ornate Victorian stonework.

It is also safer for the workforce – previously only manual checks using boosters or scaffolding towers could cause problems in the structure.

A LiDAR survey was carried out by the contractor Commedium. Drone flights also took place as part of the investigation taking high definition photographs of the Grade II listed structure.

Commendium Managing Director Richard Walters added: “At first glance, scanning the Whalley Viaduct seems easy. However, proximity to other interests such as a factory, roads, public trails and domestic properties made this project more difficult.

“The problem has been finding places to scan from so that we can capture all the necessary walls and features of the viaduct. Therefore, the cooperation of local stakeholders has been essential and, frankly, without their enthusiastic help, the work would have been much more difficult.”

Future maintenance work on the Whalley Viaduct will see:

In recent years, Network Rail has increasingly turned to technology to help with its maintenance work. In October, Network Rail’s Flight Operations team completed a 25km drone flight over land – and beyond visual line of sight (BVLOS), meaning the operator remained in the same location even after he could no longer see the plane. It is believed to be the longest civilian BVLOS flight ever undertaken.

Meanwhile, in May last year, drones were also deployed to help speed up upgrades to three 100-year-old railway swing bridges in Norfolk.

The hostess confirms the plan for the bakery