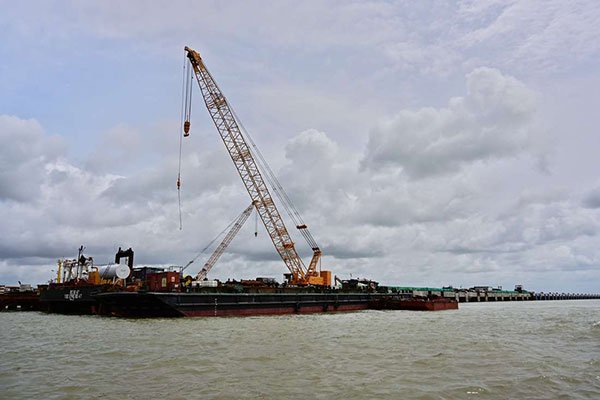 Lamu Port in Kenya was supposed to deliver big things, but it doesn’t!

For nearly two decades, successive Kenyan governments have promoted mega infrastructure projects as a path to development. Lamu Port is one of them.

In 2012, then-President Mwai Kibaki – at the groundbreaking ceremony for a transport corridor that stretches from the port of Lamu to South Sudan and Ethiopia, and known as the Lapsset – said:

I am confident that this day will go down in history as one of the defining moments – when we took a big step forward in connecting our people to the many socio-economic opportunities that await us.

However, as my research shows, the reality of these megaprojects is more complex than state officials acknowledge.

Instead of bringing development, a better society and a happier life, mega-infrastructures lead to hardship, especially for vulnerable and historically marginalized groups of people. This is clearly illustrated by the fishermen of Lamu.

The story of the fishermen provides a good lens through which to understand how vulnerable communities are affected by mega infrastructure projects. In Lamu, 70% of the local population depends on artisanal fishing. This is characterized by small scale, low cost and low technology fishing practices.

In my research, I conducted interviews with representatives of the Lapsset Corridor Development Authority, Kenya Ports Authority and local government officials, civil society groups and local key informants. I also had informal interviews and conversations with the fishermen of Lamu as I observed and participated in boat maintenance, fishing and social gatherings.

Fishermen’s experiences illustrate how communities can challenge the way major infrastructure projects are carried out. The Save Lamu Alliance, made up of civil society groups that focus on human rights, sued the Kenyan government in 2014 over the construction of the port.

Through research and community engagement, the alliance sought to demonstrate how historically vulnerable groups of people, such as artisanal fishers, are deliberately excluded from state development plans.

The fishermen of Lamu

The construction of Lamu Port has displaced fishermen from their traditional shore fishing grounds in Manda Bay. This is located at the southern corner of the Lamu Archipelago on the coast of Kenya. It is a deep, sheltered bay with a wide navigable entrance channel.

Construction of the port began in 2012 and is expected to contain 32 berths. So far, three berths have been completed. They claimed five square kilometers of Manda Bay. The first wharf started operating in May 2021.

Port construction works – including land reclamation, digging and dredging – have destroyed coral reefs and mangroves which are major breeding grounds for fish. The works have also polluted these lodgings by bringing back earth and sand. This made the area unsuitable for fishing.

These drastic effects on fishermen – and concerns about more negative environmental impacts in the future – have led to community mobilization in Lamu.

In 2014, Save Lamu took legal action against the Lapsset Corridor Development Authority for failing to consider how the project would affect the livelihoods of local people.

Four years later, in an unprecedented decision, Save Lamu won this legal battle against the national government.

A bench of three judges ruled that the construction of Lamu Port violated the rights to public participation, public information, a clean and healthy environment and culture.

The court also found that the local government of Lamu County was not involved in the planning and implementation of the port.

Regarding the livelihoods of artisanal fishers, the judges ordered the government to recognize fishing rights as equivalent to property and pay $170 million in compensation to the 4,700 fishers displaced by the construction of the port.

Civil society in Kenya celebrated the decision as a historic victory for human rights. But the national government immediately appealed.

Fishermen have not been compensated for lost livelihoods. This follows an ongoing disagreement between the national government, Lamu local government, Save Lamu and representatives of Lamu fishermen over how many people should receive this compensation and how it should be spent.

The central government prefers state-controlled development of the local fishing industry. This would include state-supervised acquisition of vessels and fishing gear for deep-sea fishing.

The government has proposed development programs that would provide necessary equipment for groups of 10 fishermen. This, he says, would solve the long-standing problem of overfishing and allow fishermen to exploit deep-sea resources. This position is supported by Save Lamu, which advocates long-term sustainability and fishing cooperatives.

Fishermen’s representatives, however, rejected these proposals. They say fishermen do not have access to infrastructure to repair or maintain the new equipment provided by the central government. Instead, they prefer to use boats that can be built and maintained locally. They also deeply distrust the central government to provide meaningful aid.

After years of wrangling, in May 2022, Lamu County Commissioner Irungu Macharia assured Lamu fishermen of their compensation. We still don’t know when it will start.

The dynamics of infrastructure development in Lamu demonstrate that mega-projects are not delivering the prosperity promised by the central government. Instead, they get involved in national and local politics and clash over different preferences for ‘development’.

In such contexts, the most vulnerable people whose livelihoods are directly affected by these developments suffer the most.

Even if civil society succeeds in representing their interests, this does not lead to any significant change.

These groups are not helped to adapt to the changing socio-economic circumstances brought about by mega-infrastructure. Major projects reinforce existing inequalities.

About the Author: Gediminas Lesutis is Marie Curie Scholar, University of Amsterdam

We just paid Belgium 50 times the going rate to keep the lights of London on – how did it come to this?