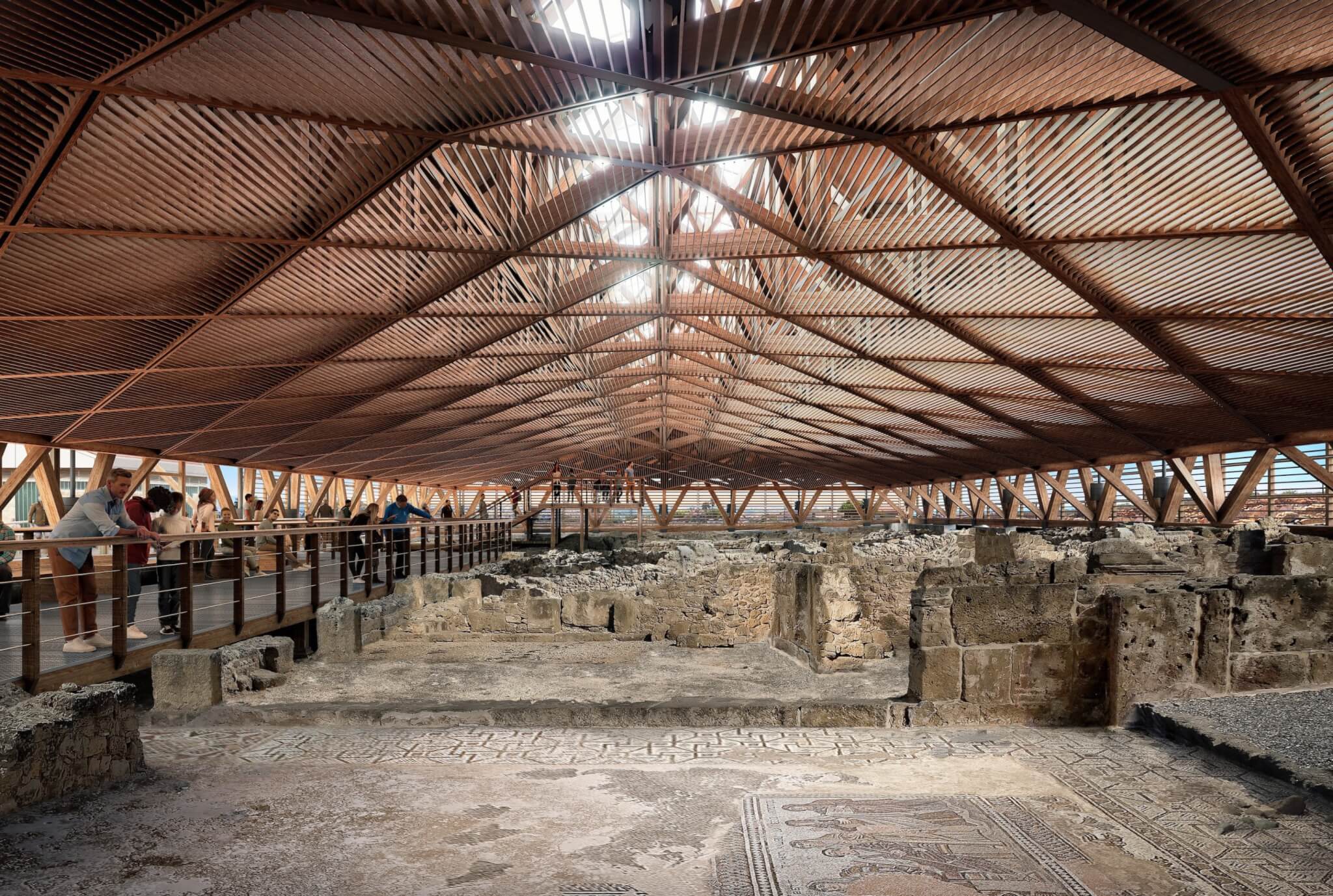 Launched in 2019 by the Getty Conservation Institute (GCI) and the Department of Antiquities of Cyprus (DoA), the competition asked participants to design prototypes of innovative and resilient structures to safeguard the ancient mosaic pavements discovered in the contiguous complex at the Mediterranean Sea, once the site of a major Greek and Roman city. (Today, the archaeological site, famous for its sprawling mosaics and ruins, is located in the Nea Paphos, or Nea Pafos, section of the modern coastal town of Paphos.) “The construction of protective shelters is imperative in order to secure and present the mosaic pavements and other excavated remains for the future,” the GCI explained in a press release.

The protective shelter program is part of a larger site conservation and management plan developed by the GCI and the DoA.

Five other shortlisted firms joined Hugh Broughton Architects: Carmody Groarke, Cullinan Studio, Studio Gionata Rizzi, Machado Silvetti and Sela Jaymes Architects (in association with Gort Scott). Like Hugh Broughton Architects, all are based in London except for Machado Silvetti of Boston and Studio Gionata Rizzi of Italy. Hugh Broughton Architects’ design for the shelter was ultimately selected from this group of top contenders by a judging panel made up of GCI and DoA staff, joined by independent international experts in a range of relevant fields, including structural engineering, conservation and archaeology. Pamela Hawkes, professor of historic preservation practice at the Weitzman School of Design at the University of Pennsylvania, chaired the judging panel.

As detailed in the press release, the jury found the design of the shelter proposed by Hugh Broughton Architects to be “the most comprehensive and balanced response to the complex criteria established by the design brief, with priority given to the protection of mosaics”. It features a column-free interior and load-bearing foundation that treads lightly on the sensitive site while providing adequate protection against seismic activity and tsunami threats. Basically, the winning shelter prototypes – designed, according to the competition design brief, to protect the main mosaics of two different ruins in Nea Paphos, the House of Orpheus and the Villa of Theseus – blend into the vast archaeological complex and the surrounding city and are not visually clashing. Featuring hipped roofs and incorporating readily available indigenous building materials, the kit-of-parts structures are designed to be easily replicable.

“Hugh Broughton Architects’ creative and thoughtful design concept protects the site’s mosaics with structures that are durable and sensitive to the archaeological context,” Jeanne Marie Teutonico, associate director of strategic initiatives and publications at GCI, said in a statement.

“We have proposed solutions that minimize the physical and visual impact on the site and make best use of sustainable passive design techniques to protect the remarkable Roman mosaics and archaeology,” added Hugh Broughton, Principal of Hugh Broughton Architects, also shortlisted earlier this year. for a major overhaul of RIBA’s London headquarters. “Our designs reflect a creative and methodical collaboration between architects, conservation specialists and engineers, all of whom look forward to working in partnership with the GCI and DoA to develop proposals to preserve the future of this magnificent place. historical.”

You can read more about the winning shelter design and the site itself here.

Inside the 908th: HVAC/R Technicians