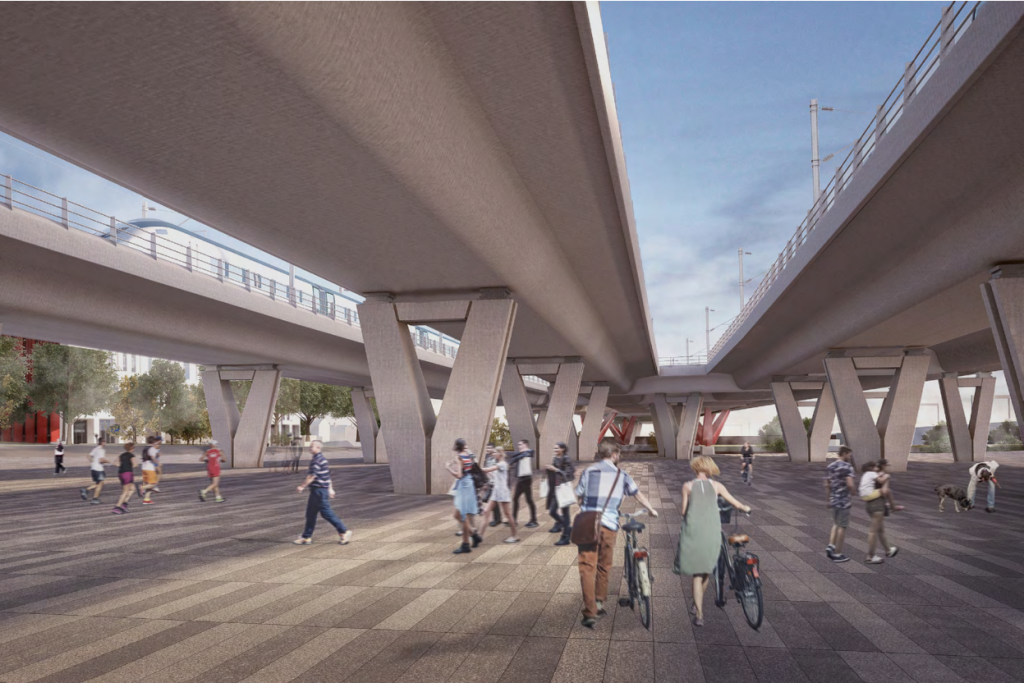 Detailed designs for a new twin viaduct to carry HS2 services to Curzon Street station via central Birmingham have been revealed and will be presented to the City Council’s Planning Committee today.

Consent is already in place for the viaduct via the HS2 Act, but HS2 Ltd is seeking planning committee approval for the details. The application relates only to the railway bridges and associated jetties, as the work underneath was granted as part of the Curzon Street application. Proposed landscaping plans will be submitted at a later date.

The four-pronged Curzon No. 3 Viaduct will be approximately 300m in length and the superstructure will be constructed as a cast-in-place concrete deck.

The Lawley Middleway Viaduct will be approximately 213m long. This element of the structure would be constructed with a steel deck.

Another viaduct, known as Curzon Viaduct No. 2, will then continue from the end of the Lawley Middleway Viaduct, but will be consented to in a future planning application.

At the intersection with the canal, the superstructure has been designed to include caissons which seek to both minimize the amount of concrete needed in the structure and provide visual interest when viewed from below.

The two viaducts will be supported by 35 reinforced concrete piers. In addition to these, four bespoke tripod piers are proposed for the section of the viaduct which crosses the Digbeth Branch Canal. These tripod pillars would be made of weathered steel as an ode to historic canalside cranes.

On either side of the railway line, apron parapets are proposed. Above the section of the bridge that crosses the Digbeth Branch Canal, the lower third of the parapet features a design that references patterns found in the ironwork of Birmingham’s historic bridges.

When the proposed bridge is divided into four sections, a lighter parapet is proposed on the inside edge of each section of the bridge. These parapets would be made with a combination of precast concrete and steel. This approach was taken to seek to increase natural light below deck.

The application indicates that there is an ambition to maximize the possibilities of creating usable and flexible public space under the viaduct.

The viaduct will pass near many heritage properties. It will run parallel to and briefly above the Grade II listed 1838 railway viaduct which spans the Digbeth Branch Canal and reaches Curzon Street station. The station itself is Grade I listed and the historic part of the Lawley Street railway viaduct is also nearby. Historic England reports that it is pleased that its concerns have been taken into account in the new plans.

The previously discovered train maintenance roundhouse – the oldest in the world – also lies under the viaduct, but was covered over until the work was completed.

The planning officer recommended approval of the plans.