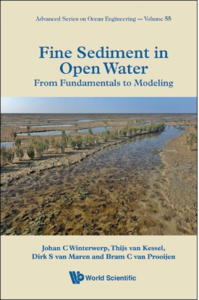 Fine sediment in open water: from fundamentals to modeling is primarily written for professional engineers working in estuaries and coastal systems, using more or less advanced numerical models. It provides the basis for a fundamental understanding of the physical, biological and chemical processes governing the transport and fate of fine sediments in open water, and explains how this understanding can guide engineering studies with numerical models. The book is unique in its treatment of processes at a variety of spatial and temporal scales, from the microscale (i.e. the colloidal scale) to systemic scales, and from intra-tidal timescales to decades. It deals with the interaction of various disciplines, among which those of hydrodynamics and soft soil mechanics, relevant to fine sediments. The book is also unique in that it addresses the path of scientific, engineering and management issues through understanding the system, setting up a conceptual model to numerical modeling. It can be seen as a sequel to the books by Winterwerp and Van Kesteren (2004) and Mehta (2013).

The book began as lecture notes for the authors’ graduate course on fine sediments, and still contains the required material and background. Since then, it has progressed and become a textbook for new and experienced scientists and engineers. The book also contains a number of new thoughts that may be worth developing in future research.

Fine sediment in open water: from fundamentals to modeling retails for US$198 / £175 (hardcover) and is also available in electronic format. To order or learn more about the book, visit http://www.worldscientific.com/worldscibooks/10.1142/12473.

Professor Han Winterwerp obtained his master’s degree in aeronautical engineering in 1976 and his doctorate in 1999 at the faculty of civil engineering, both at the Delft University of Technology. He joined Deltares in 1978 and the university in 1991. After his retirement in 2016, he continued his career as a private consultant. His career has mainly focused on research and consulting on the behavior of cohesive sediments. He has worked in many countries on a wide variety of natural and man-made sedimentary systems.

Dr. Thijs van Kessel obtained a doctorate on the formation and transport of fluid mud at the Delft University of Technology in 1997, after a master’s degree in chemical engineering in 1993. Since 1997 he has been working in Deltares (the Netherlands) on a variety of subjects in the field of cohesive transport of sediments natural phenomena, at the border between research and application. For its research projects, it has a long experience of collaborating with several universities, while for its applied projects, the Dutch government is the most important client, followed by private parties.

Teacher. Bas van Maren obtained his master’s and doctorate in physical geography at the University of Utrecht (the Netherlands). His research focuses on the dynamics of muddy rivers, estuaries and coasts, contributing to both academic and consultancy projects around the world. His key expertise is modeling the transport and morphology of fine sediments. He started working with fine sediments in 2004, first as a post-doctoral researcher at the University of Delft in technology, but also as a one-year student at Deltares (the Netherlands). Since 2019, he is also a visiting professor at East China Normal University (Shanghai, China).

Dr. Bram van Prooijen earned his M.Sc. and Ph.D. at Delft University of Technology. After working as an engineering consultant, he again joined the university. For the past ten years, he has been working on hydrodynamics and sediment transport processes in estuaries and coastal seas. Research projects often include field measurements and numerical modelling. He teaches the sediment dynamics course at Delft University of Technology.

World Scientific Publishing is a leading independent international publisher of books and journals for the academic, research and professional communities. World Scientific collaborates with prestigious organizations like the Nobel Foundation and US National Academies Press to bring high-quality academic and professional content to researchers and scholars around the world. The society publishes about 600 books and more than 140 journals in various fields every year. To learn more about World Scientific, visit www.worldscientific.com.

Warning: AAAS and EurekAlert! are not responsible for the accuracy of press releases posted on EurekAlert! by contributing institutions or for the use of any information through the EurekAlert system.

Government speeds up construction of Gwayi-Shangani Lake Pipeline in Byo