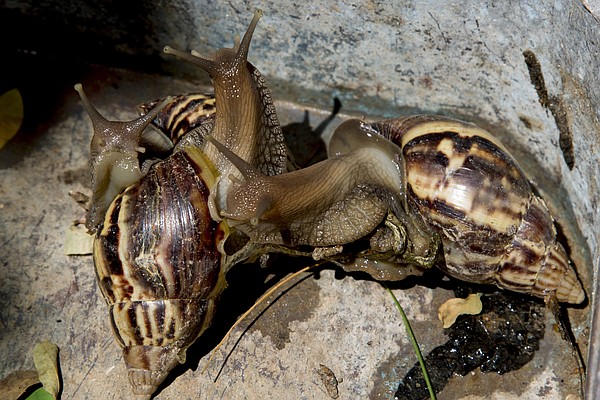 ST. PETERSBURG, Fla. — Invasive giant African land snails that can eat building plaster and stucco, consume hundreds of plant varieties and carry diseases that affect humans have been detected again in Florida, where officials said Thursday that work had begun to eradicate the parasites.

The snails, which grow up to 8 inches and have a distinctive swirling brown mottled shell, were confirmed by state agriculture officials in New Port Richey, Florida on June 23. The Pasco County location is just north of the Tampa Bay area. on the Gulf Coast.

Florida has already eradicated snails twice in other parts of the state, most recently a 10-year effort in Miami-Dade County that cost $23 million and ended in 2021 after the collection of approximately 170,000 snails. Now they are back, most likely due to the illegal international trade in exotic animals or arriving hidden in shipments from overseas.

“We are going to eradicate these snails. We have done it before and we will do it again,” Nikki Fried, commissioner of the state Department of Agriculture and Consumer Services, said at a press conference Thursday.

The snails have been found in many parts of the world such as Hawaii and parts of the Caribbean, including Cuba where an effort is underway to rid the island of pests.

Snails are known to eat 500 different types of plants, making them a major threat to agriculture, including peanuts, beans, cucumbers and melons. They also eat plaster and stucco in buildings, even tree bark, and carry a parasite called rat lungworm that can cause meningitis in humans, according to the department. They can produce up to 1,200 eggs per year.

“They are one of the most damaging snails in the world,” said Fried, a Democrat who is also running for governor this year.

A quarantine area was set up in Pasco County where the snails were found, initially by a homeowner. The affected properties will be treated with a molluscicide bait and the snails are picked up by state agents assisted by dogs trained to detect them.

Greg Hodges, deputy director of the state’s Plant Industry Division, said it’s illegal to import or possess giant African land snails in Florida without a permit. It is also illegal to move them from a quarantine area, such as Pasco County, or to bring other materials into the area such as dirt, yard waste, or building materials without an agreement with the state.

About 1,000 snails have already been collected from the quarantine area, Hodges said. He said anyone who sees a snail should not touch it, but rather call 888-397-1517 to report the find.

Fried said people should definitely avoid snails, which are not the type found in snails.