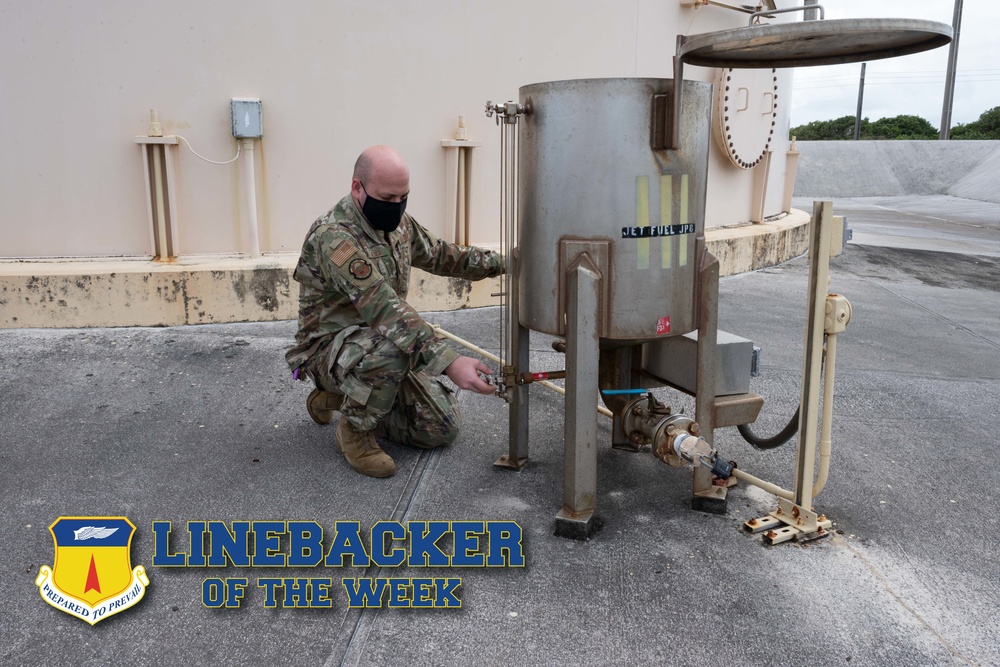 The Team Andersen Linebacker of the Week recognizes outstanding enlisted, officer, civilian and total force personnel who have impacted the achievement of Team Andersen’s mission, vision and priorities.

Alder’s time at Andersen AFB began as a Fuels Distribution Supervisor, where he led an 11-member service crew during nighttime fuel operations.

Now, Alder is the NCO in charge of fuel facilities for 36 LRS. In this position, he maintained the receipt, issue, transfer and inventory of aviation and ground fuel at Andersen AFB. Fuel currently exceeds 66 million gallons worth $163 million, making it the Air Force’s largest fuel infrastructure.

Additionally, it partnered with the 36th Civil Engineer Squadron and 36 CES Water and Fuel Systems Maintenance Element to recommission two bulk fuel tanks and perform emergency repairs on four fuel systems. At the time, Andersen AFB was at half fuel storage capacity due to a damaged tank before Alder and his team responded.

“My whole military career has pushed me out of my comfort zone,” Alder said. “But it gave me more confidence and greatly expanded my skill base.”

During Cope North in 2020 and 2021, Alder handled the issue of over 11 million gallons of fuel for over 5,000 aircraft. Additionally, he led the way in instructing Air Force refueling asset training and familiarization for personnel of the United States Armed Forces, Japan Air Self-Defense Force, and Royal Australian Air Force. .

Off duty, Alder hosts game nights and morale events for Airmen in his unit. He expressed how important it is to him to take care of his peers and keep their spirits up.

“I had the privilege of supervising the master sergeant. Alder for our three years together here in Andersen and all I can say to him is thank you,” the Air Force Master Sgt. Adam Sanchez, chief of the fuel operations section of 36 LRS. “He works very hard to further his specialist knowledge and train others while caring for his Airmen.”

The term Linebacker is rooted deep in the history of Team Andersen. Operation Linebacker II took place on December 18, 1972, and was the largest number of heavy bomber attacks launched by the United States Air Force since the end of World War II. During the operation, B-52s from Andersen flew round-the-clock bombing missions over North Vietnam to destroy major targets in Hanoi and Haiphong in an effort to bring the Democratic Republic of Vietnam to negotiations.

The recipient will have the opportunity to sign a “Linebacker” football jersey which will be displayed in the Wing Headquarters building.

Construction of water lines in Linesville to begin next week | News