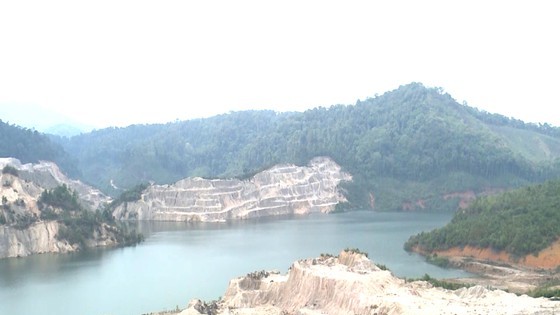 By Jennifer L. Carter On May 11, 2022
Share
The bed of the Upper Kon Tum hydroelectric water reservoir in Kon Plong district, Kon Tum province. (Photo: SGGP)
The Institute of Geophysics on May 11 said there was an investigation report on earthquakes in Kon Tum province.

Accordingly, under the leadership of Deputy Prime Minister Le Van Thanh, on April 19, the technical delegation consisting of experts and scientists trained by Institute of Geophysics, Vietnam Academy of Science and Technology, organized field trips to assess seismic activity in the area. of Kon Plong district in Kon Tum province and its surroundings.

Earthquakes from March 2021 to April 2022 in Kon Plong district, Kon Tum province and nearby areas caused the highest vibration of grade 5 which is not severe enough.

Initially, experts and scientists said that the earthquakes in Kon Plong district were seismic excitations caused by the water reservoir of the hydroelectric project. However, to confirm the causes of earthquakes and have a basis for predicting the trend and intensity of earthquakes in the future to assess the possibility of damage to civil engineering works and hydropower plants, there is a need for detailed surveys, observations and studies of tectonic geology and seismic regimes in and around Kon Tum.

The results of previous research on the seismic regime and seismic activity in Kon Tum and the surrounding area were not detailed enough to be able to assess the cause and the level of danger of earthquakes for civil structures and hydroelectric power plants. At the same time, there are no detailed studies of seismic excitations in the region. A detailed study is therefore necessary to identify the cause and the level of the seismic hazard and to propose suitable intervention solutions. In addition, there is a need for close coordination of ministries, sectors, localities and hydropower management and operation units in the area.

Regarding the management of earthquakes in the area of ​​Kon Plong district in Kon Tum province, it is proposed that the Ministry of Science and Technology develop the task of “Research and evaluation of the activity seismic survey in Kon Tum province and its surroundings to serve the prevention and mitigation of natural disasters caused by earthquakes” with the main content of clarifying the causes of the chains of earthquakes occurring in Kon Plong district and its surroundings ; the relationship between seismic activity and water storage; predict trends in seismic activity; assess the risk and develop possible intervention scenarios.

At the same time, it is necessary to spread and guide earthquake response skills to authorities and people in Kon Tum province and surrounding areas.

ConTech Conversations: For Young Industry Professionals, “Ask What You Need”