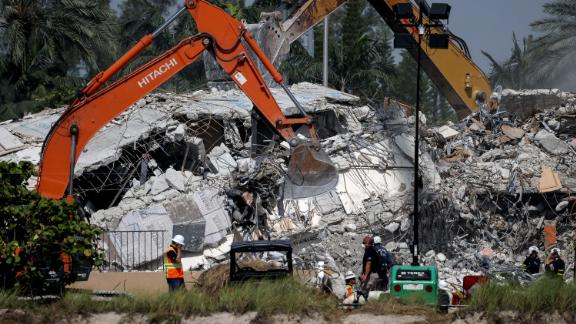 Condo owners across the country feel uncomfortable after Surfside collapse

Salomon Gold expects to celebrate his 90th birthday next month at his Champlain Towers North condo in Florida, where he has enjoyed the view of the turquoise blue Atlantic waves lapping over Surfside Beach for decades.

“You know how much they charge the hotel next door for a night? A thousand dollars,” said Gold, wearing a driver’s cap over bespectacled eyes and sporting a thick white mustache on his balcony, his wife Cila by his side. “I have it here for free.”

Since the partial collapse of the Champlain Sud twin towers last month killed at least 100 people just down the block, some residents of Gold’s apartment building chose to evacuate. Not him.

â€œI have no doubts that this building is safe,â€ he said. “You know you have twin families. I mean two brothers and the same genetics. But they’re not the same. One can be a criminal and the other can be a doctor.”

But some of Gold’s neighbors and residents of other coastal properties in Florida and beyond aren’t so confident. They have been feeling anxious and pissed off since the June 24 tragedy.

â€œEvery resident of every association, every condo, took it personally. Every professional took it personally and was really struck by it in a very moving way,â€ said Tom Skiba, CEO of the Community Associations Institute, after a brief visit to Surfside following the collapse.

These concerns are being felt outside of South Florida, where emergency re-inspections of other aging buildings have resulted in evacuations in at least four other residential structures deemed unsafe.

â€œNot just our organization, but every industry professional, every board of directors, every manager has received a huge volume of calls. Just people asking questions: could this be happening in my community, in my building? Should I be worried about this? Said Skiba, whose organization defends homeowners associations.

“Some people are particularly worried”

While the cause of the Surfside collapse is still under investigation, the disaster has prompted reviews of high-rise condominiums in the area.

A building in South Florida that sounded the alarm is Crestview Towers, approximately seven miles north of the Surfside condo. Earlier this month, the city of North Miami Beach ordered its immediate closure and the evacuation of around 300 people after a report determined the structure was unsafe.

â€œWhat upset me the most is that management has known since January,â€ said Harold Dauphin, a Crestview resident, of the building’s structural and electrical issues.

The Crestview towers were found to be structurally and electrically unsafe based on an overdue recertification report for the nearly 50-year-old building, according to city manager Arthur H. Sorey III.

Crestview’s attorney did not respond to multiple requests for comment from CNN.

The report was dated January 11, 2021 and was submitted July 2, Sorey said. In this document, an engineer hired by the condominium association related the structural and electrical defects of the building.

“As a resident, we did not realize the situation,” lamented Estefania Grajales, who also lives in Crestview.

In fact, Dauphin said he first learned of the evacuations while picking up his 7-year-old from the camp. As he approached the residence recently, he said he saw helicopters flying overhead and police at the scene – going from floor to floor – helping with the evacuation.

“I understand the call,” he said of the evacuation order. “It’s a big call to know what happened at Surfside. So prevention is better than cure.”

Before collapsing, the South Champlain Towers had been visited regularly by officials in recent years. City of Surfside inspectors performed permit inspections at the condo tower more than once a week on average in 2018 and 2019, according to a CNN analysis of city archives.

But even when an engineer hired by the board of directors of the building put “major structural damage” on the property – and as residents vie for funding for costly repairs – no records appear of city officials raising red flags. Their job was to ensure compliance with permits for plumbing upgrades, air conditioning repairs, and window installations, not to assess the building structure.

The Champlain Towers South Condominium Association, which has been cited in lawsuits accusing it of failing to maintain the building, issued a statement earlier this month stating: “Answers will take time on a full investigation and we will continue to work with municipal, state, local and federal authorities in their rescue efforts and to understand the causes of this tragedy.”

â€œWhat is the status of our buildings here? “

Concerns about the structural integrity of condominiums extend beyond high-rise apartment residents along Florida’s 1,350-mile coastline.

About 30 million people live in condominiums across the United States, according to the Community Associations Institute.

â€œWe share some similarities with the Florida skyscraper coastline,â€ said New York State Senator Todd Kaminsky, a Democrat from Long Island. “We ask ourselves the question: what is the status of our buildings here? “

“We are hearing from concerned voters questioning the structural integrity of their buildings,” the letter said.

“There may be people who don’t like the answer”

Skiba said the rules on condominium reserves – or how much money councils should have on hand to repair a building – vary by state. But the Surfside collapse highlights the need for a reserve standard to address structural integrity.

â€œThe reserve standards do not deal with structural issues,â€ he said. “They deal with replacement items which are generally treated due to age or wear.”

An independent budget review had warned the Champlain Towers South condo association that its financial reserves were severely underfunded in the face of urgent structural repairs just over a year before the building fell, according to a document obtained by CNN.

Joel Figueroa-Vallines, a fellow of the American Society of Civil Engineers, expressed concern about the hundreds of aging properties in South Florida.

â€œWe know there may not have been proper maintenance or quality control,â€ he said of the Surfside condo building. “So let’s go. Let’s talk with the associations. Let’s try to inspect them and let’s go from there.”

Allyn Kilsheimer, an 80-year-old structural engineer and veteran of forensic investigations during disasters such as the Pentagon after 9/11 and the collapse of a pedestrian bridge at Florida International University in Miami, has been hired by the city of Surfside .

Kilsheimer surveyed the North Champlain Towers building, ordering tiles removed from the pool deck and concrete samples drilled through the walls for a series of tests that he hopes will explain what led to the collapse. from the south Champlain towers.

â€œThere is nothing that I know of so far here that tells me that this is symptomatic of condominiums in the United States of America,â€ he said.

His job is only one part of overlapping investigations that involve homicide detectives, local prosecutors and government engineers and could take years.

â€œWe’re going to find out,â€ Kilsheimer said. “There may be people who don’t like the answer. But we’ll find out.”

The north tower, sister of the southern Champlain towers, had the same designer architect and structural engineer.

Gold has lived in the North Tower since 1981, the year it was built, and served as president of his condominium association for a decade. He does not intend to leave although many neighbors have left.

â€œI don’t blame them for moving,â€ he said. “Everyone has to make their own decisions. It’s like stealing. Some people are afraid of stealing.”

Construction of Sterling Nature Center delayed due to material costs