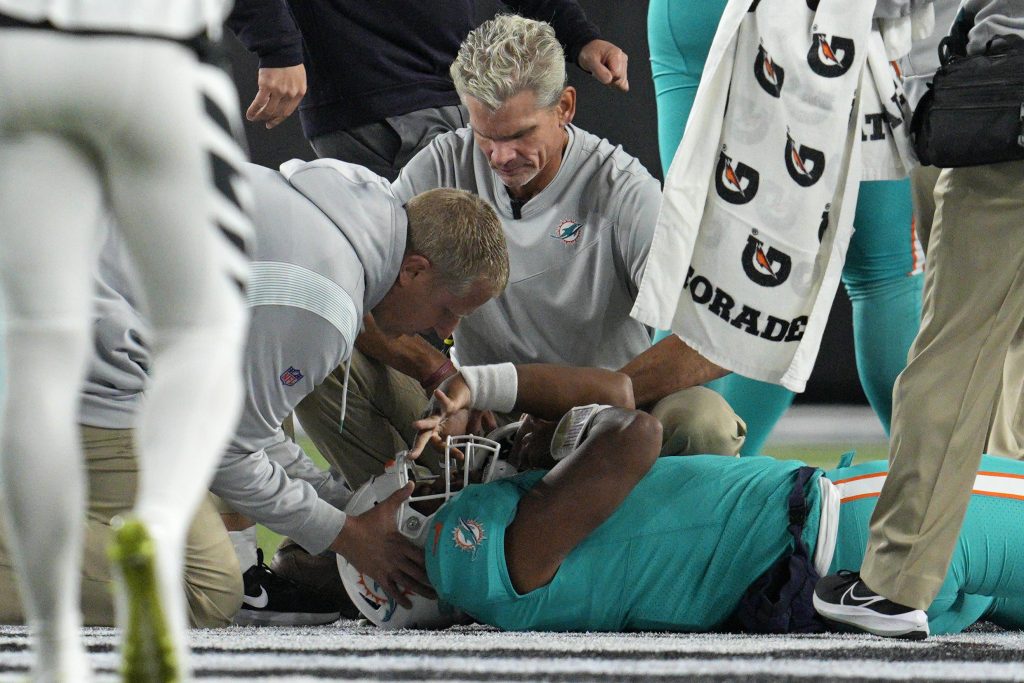 This column was written by Paul Newberry, AP sports columnist.

There is one thing we all agree on: Tua Tagovailoa had no business on the pitch.

Not in the second half last Sunday.

Not in the first half on Thursday night.

Beyond that, it becomes much more complicated.

The Miami Dolphins quarterback was taken out on a stretcher with a concussion during a primetime game against the Cincinnati Bengals on Thursday, a particularly chilling incident as it came just four days after another blow against the Buffalo Bills left him reeling.

“I’m sick,” former NFL linebacker Emmanuel Acho said in a video posted to Twitter. “When are we going to worry about player safety? Enough is enough.

The fact is, the league has taken steps to make the game safer, from concussion protocols to equipment changes to new rules that penalize rough hits.

But there are no easy answers when it comes to protecting players who voluntarily participate in violent sport, knowing that it is impossible to completely eliminate the risk of catastrophic injury.

Surely the NFL could do more. The teams too. And the players’ union. And the players themselves, who are often their worst enemies when it comes to health and well-being.

That said, something has clearly fallen through the cracks in this case.

Anyone who saw the shot on Sunday – Tagovailoa was pushed off after an off-balance throw, the back of his head slamming into the turf – saw the telltale signs of a concussion.

Tagovailoa stood up like a boxer drunk on punch. He shook his head, apparently trying to clear the cobwebs. His legs gave out, dropping him briefly to his knees, before he was helped to the sidelines.

Amazingly, he only missed three Miami snaps at the end of the first half. Tagovailoa returned after the break to finish the game, leading Miami to a 21-19 win over the Bills.

While the QB and his team insisted that a back injury caused his rubbery legs, that explanation was rightly met with skepticism.

So much so that the NFL and the players’ union launched a joint investigation to ensure concussion protocols were being followed.

The investigation is expected to take up to two weeks. At the very least, Tagovailoa should have been made to sit until he was done.

“A failure of medical judgment is a failure of protocols when it comes to the welfare of our players.” — JC Tretter, President of the NFL Players Association

It also seems logical in these cases to require further examination by an independent medical team, to ensure that a head injury was not the cause of the problem even when a player passes the initial tests.

Instead, the Dolphins – the last undefeated team in the AFC before their 27-15 loss to the Bengals – allowed Tagovailoa to play on a shorter-than-usual turnover against the defending conference champions.

With around six minutes left in the first half, everyone’s worst fears have come true. Tagovailoa was chased down by a 340-pound lineman, spun around, and thrown to the turf headfirst.

While on the ground, Tagovailoa’s hands froze in front of his face mask, his fingers flexing awkwardly in what appeared to be the so-called “fencing response” caused by a traumatic blow to the brain.

He didn’t get up this time.

JC Tretter, president of the NFL Players Association, said it was imperative to determine how a player with what he called “a symptom of non-attendance” was allowed to re-enter a game in the first place on Sunday, without talk about why he was allowed to play again four days later.

Tretter also acknowledged that the protocols are hampered by the inexact science of determining brain damage. Mistakes can be made, even when each step is followed to the letter of the guidelines.

“Until we have an objective and validated method for diagnosing brain damage, we must do everything we can, including changing protocols, to further reduce the potential for human error,” he said. “A failure of medical judgment is a failure of protocols when it comes to the welfare of our players.”

After his latest injury, Tagovailoa was loaded onto a spine board, stabilized and tied to a stretcher. There was no doubt that he had suffered a concussion. He will need to be symptom-free before he can play again.

“My heart rate literally jumped because I saw Tua showing concussion symptoms last week, and they let him back in the game,” Acho said. “They called it a back injury. He might have been, but he was showing concussion-like symptoms. Prevention is better than cure.”

Perhaps it will be another wake-up call for a sport that has left a litany of broken and damaged humans in its wake.

Certainly, Tagovailoa’s case has attracted more attention because of the position he occupies, the most important and best paid place in the field. Most fans have already left Bills cornerback Dane Jackson, who suffered a frightening injury in a Sept. 19 game against Tennessee that forced him to be rushed to hospital with the head immobilized.

Jackson says he’s fine and ready to get back into the game.

Let’s hope Tagovailoa recovers too, although he should seriously think about whether this game he loves so much is really worth it.

A few found the courage to leave rather than risk injuries that could affect them for the rest of their lives.

If Tagovailoa, just 24, is faced with such a decision, let’s hope he makes the right choice. It’s time someone did.