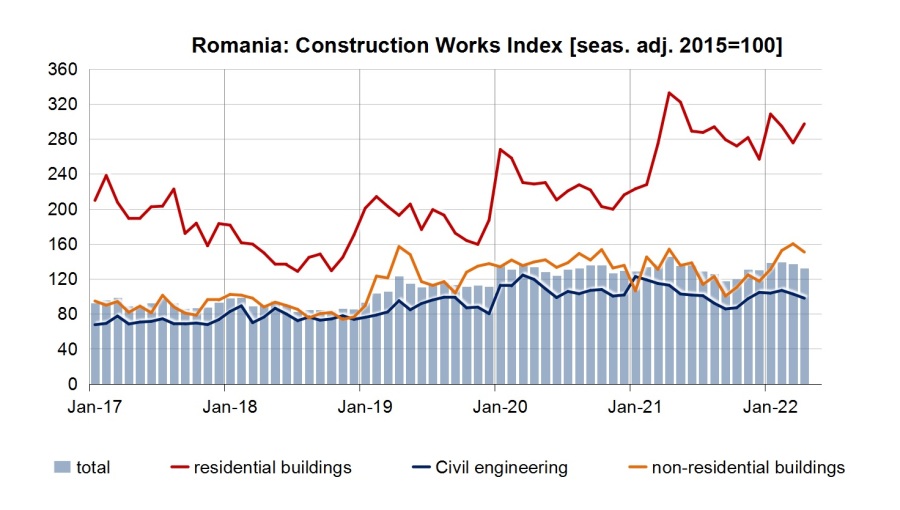 The situation is not as dramatic as the April figures might suggest, but construction activity in Romania – as the January-April figures suggest – is heading for the second year of stagnation after falling slightly by 0.6% in 2021.

This is unlikely to be the case, given the ambitious plans outlined under the Recovery and Resilience Facility – but the rising cost of construction materials and the inelastic supply of workers are significant obstacles to the growth of the sector.

In April, the seasonally adjusted construction index fell for the second month in a row, reversing much of the gain accumulated over the previous four months—translating into a fairly stable activity profile that would require additional resources to the activity increase durably above the levels observed during the last two years.

The non-residential buildings sector (-2.3% y/y in April) posted a negative monthly evolution (-5.9% m/m) after an impressive 60% increase over the previous half-year, in adjusted terms. seasonal variations. Overall, it remains around the average levels seen in 2020-2021.

Civil works (-14.2%y/y in April) lost intensity for the second month in a row and remain vulnerable to tight government fiscal space.

Even the residential buildings segment contracted by 10.1% year on year in April, while remaining close to the high levels seen in the previous 12 months.

A construction student inspired his classmates to enter the field