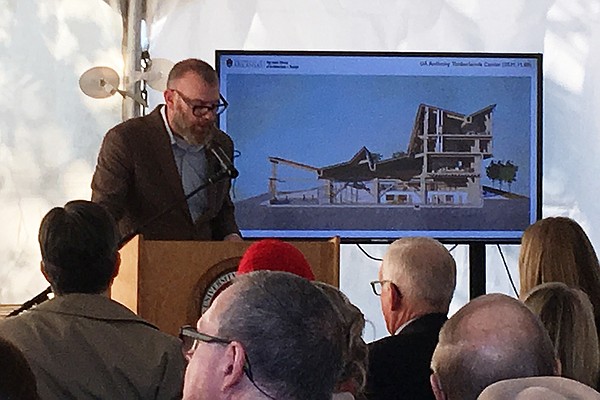 FAYETTEVILLE – A $ 26.5 million building with a unique pitched roof and wood-centric design from a renowned Irish architectural firm will showcase efforts to use the state’s forests in construction, have University of Arkansas officials said last week.

But the estimated cost of the new Anthony Timberlands Center for Design and Materials Innovation project has risen by $ 7 million from what the University of Arkansas board of trustees approved in September last year. .

Construction is slated to begin a few blocks from UA’s main campus in early 2022, on a site considered part of UA’s Windgate Art and Design District, essentially one block that also includes a new building from UA. visual arts under construction.

Peter MacKeith, dean of the AU’s Fay Jones School of Architecture and Design, said in an interview that the amount of university dollars to be used for the project – $ 7.7 million, as stated in the board’s documents. administration from last year – remains the same. , with cost increases reflecting the construction market in Northwest Arkansas.

“It’s rampant now in our area, given that there is so much construction going on and a shortage of skilled labor, and really a premium on the subcontractors and the skills they can provide. “MacKeith said.

Private donors will pay the additional costs, MacKeith said. He said the design has been revised taking into account construction costs.

â€œIn order to cope with escalating construction costs, we have taken a very careful look at the program, all resized, reworked the engineering to produce a more structurally efficient, spatially efficient and direct-to-use design,â€ said MacKeith said.

In September last year, AU officials said the estimated cost of the project had risen to $ 19.5 million, from $ 16 million in March 2020.

John Thomas, a spokesperson for the AU, said on Friday that the information submitted to administrators was based on a project concept developed before a design competition leading to the selection of Grafton Architects.

â€œOnce the team got into the building design, the total revised project amount was determined as design versus budget,â€ Thomas said in an email. “The increase is due both to a better understanding of the project and its requirements, but is also influenced by the significant increase in construction costs observed both locally and nationally.”

The project is named in honor of John Ed and Isabel Anthony after their donation of $ 7.5 million announced in 2018 to support the new facility.

MacKeith, John Ed Anthony and senior UA and UA System officials spoke with the project architects on Friday at a groundbreaking ceremony for the project.

Anthony, a longtime lumberjack, praised MacKeith for pushing forward a vision to boost the state’s lumber industry and make better use of its forests.

The project has been recognized nationally and internationally as a winner or finalist of various architecture awards. The American Institute of Architects described the Adohi Hall project on the housing prices section of its website as “a bold demonstration of sustainability with clear links to the importance of forestry to the region.”

MacKeith “must have told me about the technology and why it was good. And I wanted to know how much it was going to cost. And he said, ‘Well, it’s going to be a little more expensive, Charles,” “Robinson said. , recalling how MacKeith said the project would be worth it.

â€œHe was right, and we went ahead with that,â€ Robinson said on Friday.

UA System President Donald Bobbitt spoke about MacKeith’s vision for education and training related to the use of wood in architecture, as well as the use of state forests.

â€œMobilizing the state to take advantage of this resource will create significant economic benefits now and in the long term for the state,â€ Bobbitt said.

The project is expected to use more than 62,000 cubic feet of Arkansas lumber, according to information provided by the university. Its main structural elements are cross-laminated timber, beams and columns in southern yellow pine.

The $ 26.5 million Anthony Timberlands Center for Materials Design and Innovation on the University of Arkansas, Fayetteville campus, designed by Grafton Architects, will use state forest products in the construction. (Grafton Architects rendering)