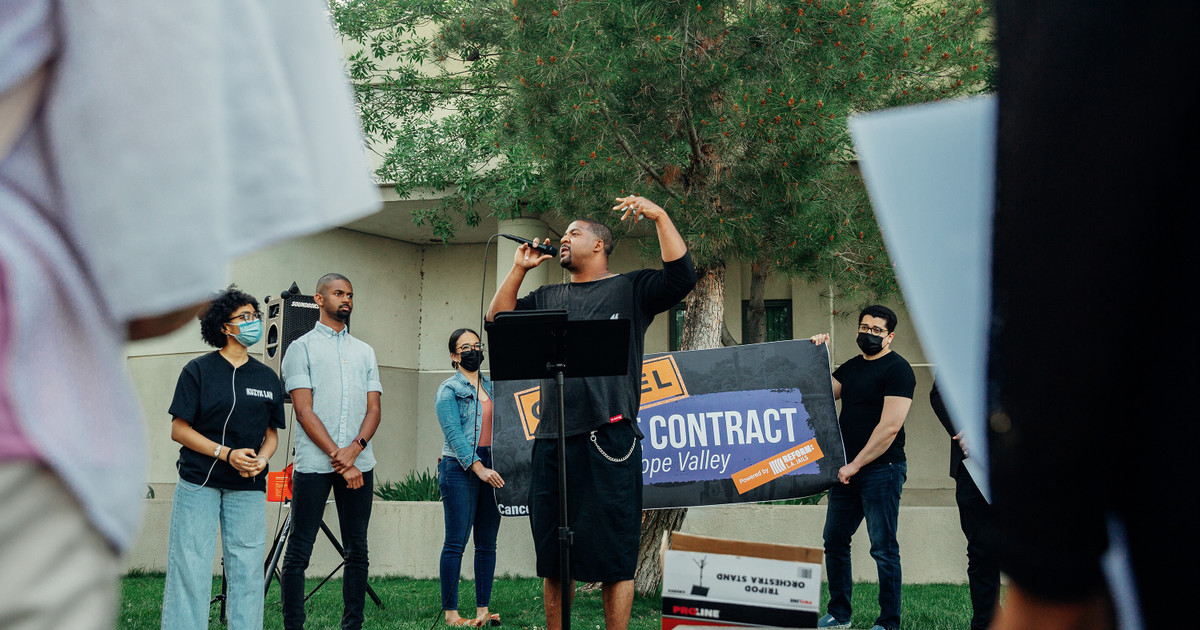 A sheriff’s captain called our investigation “an entertaining piece of fiction.” An inspector general disagrees. —ProPublica

This article was produced for ProPublica’s Local Reporting Network in partnership with KPCC/LAist. Subscribe to Dispatches to get stories like this as soon as they’re published.

The analysis was spurred by a year-long investigation into allegations of racial discrimination in Antelope Valley high schools by LAist and ProPublica. Looking at data from the 2018-2019 school year, our survey found that black teens made up 60% of assistant contacts at Lancaster high schools, despite only making up about 20% of enrollment at those schools.

Inspector General Max Huntsman’s office reviewed data from the sheriff’s department for the 2019-2020 school year and said its findings supported the news organizations’ investigation. Additionally, he said the problem could be worse than the numbers indicate, due to flaws in the department’s data collection system.

The report also criticized the sheriff’s department for providing no evidence for claims it made that called into question the validity of our analysis.

“The practice of making public denials without factual support is fundamentally inconsistent with California law controlling the conduct of law enforcement,” the investigators wrote. “ProPublica’s analysis appears to be fundamentally correct.”

In an emailed statement, the sheriff’s department told the LAist it could not provide immediate comment because it had not yet fully reviewed the report.

“What we can say is that Sheriff Alex Villanueva takes allegations of misconduct very seriously and we will provide a more detailed response once we review these findings,” the department wrote.

Just after the article was first published last fall, Capt. John Lecrivain, the chief of the Lancaster Sheriff’s Office, told commissioners the investigation was “very entertaining fiction”. He struck a different tone at Thursday’s meeting.

“This is a serious concern for the department, and we appreciate the opportunity to participate in the discussion and find solutions,” he said, adding that the department has reviewed its data and “we found that There was a certain disparity in the contacts with the students.

Deputy Inspector General Mahdi Mohamed told the meeting that the sheriff’s department also failed to respond to investigators’ request from nine months ago for information – including video from a camera carried to the body – regarding an incident at Lancaster High School in which a 16-year-old student, MiKayla Robinson, was punched in the body by a sheriff’s deputy.

Mohamed said the sheriff’s department’s lack of information made it difficult “to investigate the reason for the deputy’s contact with the student.” He said the office finally received the body camera video in the past few days.

Robinson’s attorney, Lisa Bloom, said she filed a lawsuit in May against the Antelope Valley Union School District and the Sheriff’s Department, alleging civil rights violations. Neither the school district nor the sheriff’s department responded.

“The findings of this new report that black students are cited, arrested, suspended and expelled at disproportionately higher rates than other students should be a wake-up call,” Bloom said in a statement. “Immediate action must be taken to protect black students from further harm.”

In 2015, the US Department of Justice and the Los Angeles County Sheriff’s Department entered into a court-ordered consent decree agreeing to reforms that included protections against racial profiling. That agreement arose from the findings of a two-year investigation by the DOJ’s Civil Rights Division, which found, in part, that deputies routinely racially profile black residents of Antelope Valley.

The data reviewed by the Inspector General’s office and by LAist and ProPublica came from the Sheriff’s Automated Contact Reporting System.

Huntsman’s office analyzed nearly 17,000 contacts by Lancaster station deputies — who are assigned to Antelope Valley high schools as school resource officers — during the 2019-20 school year. About 400 of these contacts were made in or around 11 high schools in the valley.

Investigators said the ACSS system “is inaccurate and significantly under-reports important data.” In a report released this month, the bureau found the sheriff’s department underreported more than 50,000 stops and more than 70,000 arrests between 2018 and 2019.

“Any conclusions based on this review of the SACR data likely underestimate the issues identified in this report, particularly those related to racial disparities,” the investigators wrote. They called on the sheriff’s department to improve the accuracy of the system.

The Inspector General’s analysis found that black students made up about 67% of contacts made by Lancaster station MPs, but only about 18% of total school enrolment.

By comparison, Latino students — who make up the majority of the school’s population, about 64 percent — made up just 26 percent of adjunct contacts.

The report says these findings are consistent with previous reports from news outlets.

Sheriff’s Deputy Justin Ruppert, team leader of Lancaster Station’s School Safety Unit, told LAist and ProPublica that the vast majority of deputies’ contacts on campus are based on referrals from staff and school administrators – rather than being initiated by law enforcement. At the time of the original story, Antelope Valley Union School District administrators did not respond to interview requests or a list of written questions.

The Inspector General’s office, however, found that “the majority of school contacts were self-initiated by deputies.” However, he noted that MPs may not code calls correctly.

Huntsman’s office also found that black and Latino school-aged youth had fewer recorded contacts with deputies outside of school than inside.

Notably, white students had more contact with deputies outside of school than inside.

Additionally, the inspector general’s office found that black students accounted for 54% of total suspensions in the 2019-20 school year.

About 1 in 7 black students in high schools have been suspended, a rate more than twice the state average.

Black and Latino students each accounted for about 47% of expulsions, although black students were expelled at a disproportionate rate given their much lower share of the student population.

A call for transparency and training

The office listed a number of recommendations “aimed at increasing the transparency, accuracy and effectiveness of the oversight of school resource assistants and the safety of youth in the community.”

Investigators also recommended that the Sheriff’s Department expand its training program “to educate all patrol-related deputies on their desirability to act as informal counselors and gateways for at-risk youth to county non-criminal services.” .

Last June, the Los Angeles County Board of Supervisors passed a motion holding the county’s CEO to account for a plan to collect and publish data related to deputies’ contact with young people.

On Thursday, Gardner said over the phone that he believes the numbers in the inspector general’s report “come as no surprise” to school staff and Antelope Valley residents.

“I could have guessed those numbers off the top of my head,” he said.

Gardner also said he wanted the inspector general’s report — in addition to acknowledging that his black students were being overly scrutinized — to give more context to the issues his black students face. He listed a few: “homelessness, foster families, parents and prisons” – and systemic racism. Gardner said all are factors that prevent black students from accessing socio-emotional and mental health resources.

“That’s what we think is the best way to handle it – with the cops,” he said.